On October 4th, this: 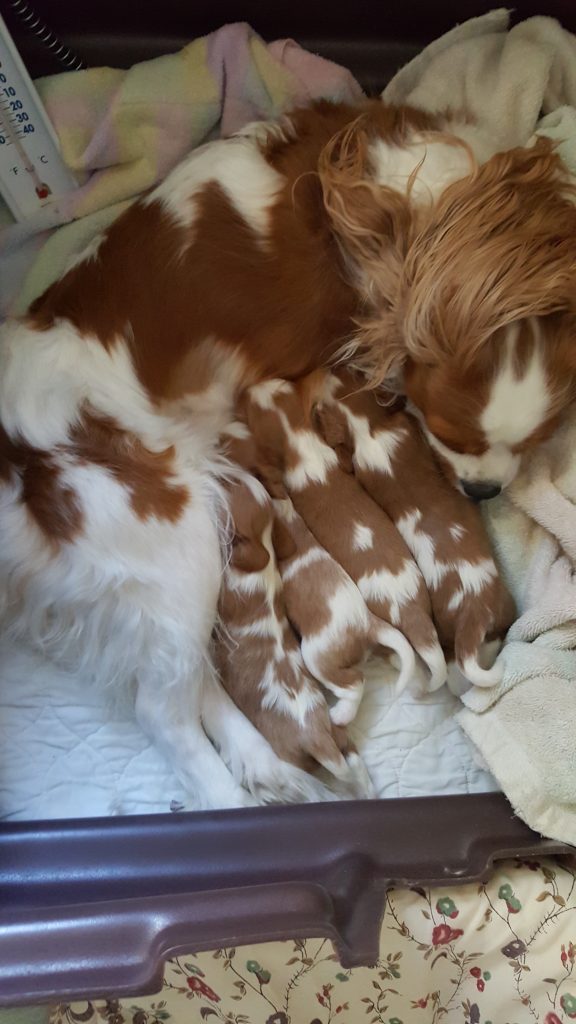 I was lucky in the timing! World Fantasy is November 2-5, which is fine, because by then the puppies will be four weeks old and just hitting the very easiest period: old enough to be safe from chills, young enough you needn’t worry much about weaning or at all about housetraining. If Honey had come into season just two weeks later, I’d either have had to skip breeding her or skip the WFC. As it is, everything should be fine, barring wild emergencies.

The puppies are actually two weeks old in this picture. At this point, the boys are well over a pound, the girls right around a pound. The boys started out about seven and a half oz, the girls about five and a half oz. (This is just random, not a sex-related thing. It has to do with quality of the placental connection and the uterine environment, and in this case the girls happened to wind up smaller. One can’t estimate adult size from birth weights or weights at two weeks.)

The little girls opened their eyes at 13 days; Boy 1 at 14 days; and Boy 2, a real little hippo, at 16 days, so I guess we can conclude that size doesn’t influence time of eyes opening. The puppies don’t look much like Cavaliers yet, but they are starting to look like puppies! So now that I’m sure they are thriving, I’m willing to introduce the “L” litter.

The only reason for disappointment: only one puppy is really well marked, and alas, he’s a boy. I so did not want to keep another boy, but, well, I am leaning that way at the moment. Neither girl has great markings, with Girl 1 having an unusually dark face:

Since I’m not crazy about the girls’ face markings, I’ll be taking a good look at them both in about seven weeks and making a decision about which to keep solely on type and structure. Though they will change a lot as they grow and their heads take on a proper shape and their faces gain expression — at that point I may find that the markings on Girl 1 actually are kind of cute.

Most breeder-judges do not look a lot at markings, by the way, on the grounds that if you don’t care for a particular dog’s markings, well, they won’t be there in the next generation. But there’s no question that markings are bound to be a deal-breaker when it comes to a hard choice between two dogs that are about equal in other ways.

Meanwhile, while waiting for the puppies to grow up a bit more: “L” names …

We had a pretty snazzy eclipse here. So how about:

You recall that all of these would have “Anara” in front because that is the kennel name.

On the other hand, the mother is Anara Honeysuckle Rose and Kimmie, a full sister, is Anara Kimberlyn Rose, so keeping “Rose” in the name would add extra charm if I wound up keeping one of the girls. In that case, maybe lose the moon theme as a theme and go with:

Or possibly choose some names that include an “L”, but not as the first letter. For example:

And then add random names that just sound good as show names:

Well, I shall muse upon it. It does help to have the show name suggest the callname. Like anything with Luna or Moon for a girl could be “Luna.” Fiat Lux could easily just be “Lux.” Leonidas easily shortens to “Lon.” What would you call a boy puppy if you named him Lunar Eclipse, though?