I’m not much for horror, really, but given the time of year, this list from Book Riot caught my eye: 14 of the Scariest YA Books for Horror Fans

Especially because I’ve met the author of The May Queen Murders, Sarah Jude. She’s often at Archon; she’s probably local or local-ish to the St. Louis area. 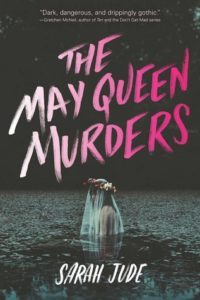 Nice cover, eh? I like the pink lettering across this horror cover.

Ivy’s family has lived in Rowan’s Glen, a remote farming community in the Missouri Ozarks, for centuries. The other kids at school may think the Glen kids are weird, but Ivy doesn’t care—she has her cousin Heather as her best friend. The two girls share everything with each other—or so Ivy thinks. When Heather goes missing after a May Day celebration, Ivy discovers that both her best friend and her beloved hometown are as full of secrets as the woods that surround them.

I do read a little horror, now and then. Maybe I’ll give this a try.

Another book on this list, There’s Someone Inside Your House by Stephanie Perkins, that strikes me exemplifying a super-unlikely type of horror plot. I mean, super-unlikely but you see it all the time. Here’s the description:

One-by-one, the students of Osborne High are dying in a series of gruesome murders, each with increasing and grotesque flair. As the terror grows closer and the hunt intensifies for the killer, the dark secrets among them must finally be confronted. This is a fresh take on the classic teen slasher story that’s fun, quick-witted, and completely impossible to put down.

Pop quiz for the parents out there: the students at your kid’s high school are getting gruesomely murdered. You:

a) Tell your kid to be careful and stay with groups.

b) Decide this is an excellent time for a family vacation, pull the kid out of school, and vamoose.

I just can’t see anybody picking Option A. If the parents have trouble getting out of town for practical reasons, this is a fine time to send the kid to stay with grandma. Or hey, at the very least, time to withdraw the kid from school and try out homeschooling. Who in their right mind would let their kid set foot anywhere near this high school while the murders are still going on?

Lots of horror plots like that. You know, if I moved into a new house and blood started running down the walls and a voice hissed GET OUT, I don’t know about you, but I would skedaddle.

Here’s the one from this list that most appeals to me:

The Girl From The Well by Rin Chupeco

A dead girl walks the streets. She hunts murderers. Child killers, much like the man who threw her body down a well three hundred years ago. And when a strange boy bearing stranger tattoos moves into the neighborhood so, she discovers, does something else. And soon both will be drawn into the world of eerie doll rituals and dark Shinto exorcisms that will take them from American suburbia to the remote valleys and shrines of Aomori, Japan. Because the boy has a terrifying secret—one that would just kill to get out.