A sensible woman would never have accepted the invitation in the first place. A week-long house party filled with bickering gentleman magicians, ruthlessly cutthroat lady politicians, and worst of all her own infuriating ex-fiancé? Cassandra Harwood only agreed to attend because of pressure from her incurably romantic sister-in-law . . .

Okay, so that’s the setup. This novella is an Austen-style romance, with the primary question being when and how and through what obstacles Cassandra will get back together with her ex-fiancé, Wrexham. Except it’s not aaaallll that much like an Austen story, because this is really an adventure story with romance rather than the other way around – the romance is important, but the obstacles, wow, substantially greater peril than you ever see in an Austen novel. 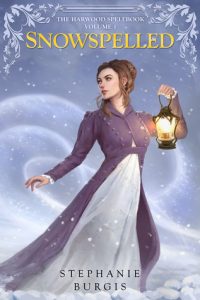 This is not Austen’s England. This is an England where if you fail to pay the proper tax for your carriage, it’ll be picked up by a troll and carried off, with you left to make your way on foot to your destination. It’s an England where fairies are mostly not dangerous any longer and the longstanding treaty between elves and humans means there probably won’t be another major war . . . unless somehow that treaty were to be broken.

That’s not the coolest part of this alternate history, though. The coolest bit is how, long ago, the warrior queen Boudicca used her magic to defeat the Romans and set the stage for this recognizable but very different England, where politics is the domain of ladies of good family, while magic has become the purview of gentlemen. Sex roles (and class expectations) are almost as rigidly codified as during that period in our own history, but along quite different lines.

Cassandra’s life has been complicated because she was born with an obsession with and talent for magic instead of politics. To make matters worse, she unwisely bit off more than she could chew, magically, and lost the ability to safely do magic. That puts her in an awkward position vis-à-vis trolls and elves, various guests at the house party, and most particularly her ex-fiancé.

All this makes for a great background to the story, but that’s as much as I probably want to say about it. Any more would start to give too much away. I’ll just say that the reader is likely to enjoy cheering on Cassandra and Wrexham as they sort out their problems and get back together – while dealing with snowstorms, trolls, elves, a wide variety of peculiar houseguests, and a ticking clock counting down toward real disaster.

Smooth writing that deftly establishes the world and characters, a fast pace that sweeps the reader along, and a determined but imperfect heroine all work together to deliver a story with tons of charm and a resolution that is satisfying without being simplistic.