Here’s an interesting if short article: What Did Houses For Ordinary People In Sumer Look Like?

The average house was a small one-story structure made of mud-brick. It contained several rooms grouped around a courtyard. People with more resources probably lived in two-story houses, which were plastered and whitewashed and had about ten or even twelve rooms, equipped with wooden doors, although wood was not common in some cities of Sumer….The ground floor in two-story houses, usually consisted of reception room, kitchen, and toilet and servant’s quarters….Most houses (approximately 90 square meters) had a square center room with other rooms built around an area that provided access to the light and ventilated the interior…. 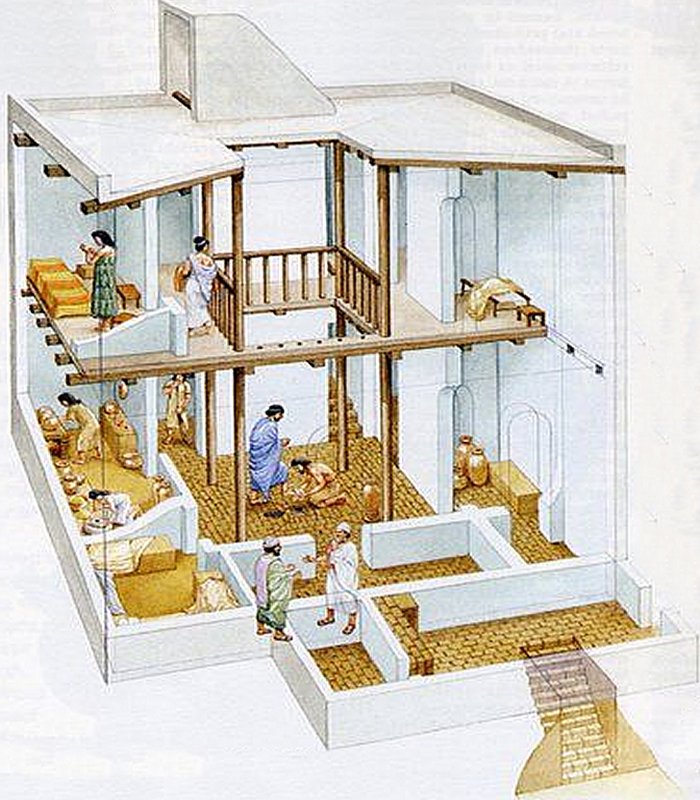 Doesn’t this look comfortable and pleasant? Ninety square meters is close to 1000 square feet, which is not that much smaller than my house, so it gives me a fair idea of how much space a family might have enjoyed (at least a wealthier family).

And it’s so interesting what else people substituted for wood. The wealthy used mud brick, but others used reeds:

Sumer had no trees for timber but it had the huge reeds in the marshes, and this raw material was widely used in building of reed houses….People tied reed bundles or plaited them into mats and set vertically in the ground, like columns, in two parallel rows, and then their peaks were tied….“Digging a series of holes in the ground, the builders would insert a tall bundle of reeds in each hole. A circle of holes would be used to make a circular house; two parallel rows to make a rectangular one. Once the bundles were all firmly inserted, the ones opposite each other would be bent over and tied at the top to form a roof. For a front or back door, a reed mat would be draped over an opening (either at the ends of a rectangular house, or on the side of a circular one).

Slightly related: here’s another archaeological event I happened across recently:

A Lost Underwater City Has Been Found 1,700 Years After a Tsunami Sank It

Archaeologists have come across a vast network of underwater ruins making up the ancient Roman city once known as Neapolis, which was largely washed away by a powerful tsunami around 1,700 years ago….The dramatic deep sea find includes streets, monuments, and around a hundred tanks used to produce garum – a fermented fish sauce that was a popular condiment in ancient Rome and Greece and is likely to have been a significant factor in the Neapolis economy.

There’s a linked video showing the exploration of this underwater site.