Okay, so, I know, Walk on Earth a Stranger has been out for a few years. And it’s actually been on my radar the whole time. But what gave me a shove recently was seeing a tweet about it being a Kindle special for $1.99. I’ve ignored my share of notifications about Kindle deals, but by a startling coincidence I was at that moment exactly in the mood for a detailed, well-researched historical novel, with or without minor fantasy elements, which I knew described this novel. So I guess it was meant to be. 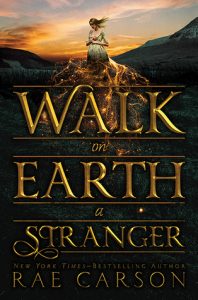 I read the first book, then immediately bought the second, Like a River Glorious, and read that one too, then preordered the third, Into the Bright Unknown, which is due out next month. I expect that’s why the first suddenly went on sale, which is certainly an excellent strategy; you see how it worked for me.

Okay, the first thing to know about this trilogy is that it is very much a historical, with only a minor snippet of magic in the first book – the main character, Leah Westfall, is a gold dowser. Which is super handy since this story is set during the era of the California Gold Rush. But this fantasy element is VERY minor in the first book. Leah’s gift develops a bit more in the second installment and one can definitely anticipate an even larger role in the third. As far as I can tell, there are precisely zero other magical elements in the trilogy, though there are hints here and there that Leah’s gift may not have come completely out of nowhere.

The historical setting is the point, though, not the magic. Tell me, how did you feel about Tolkien covering every. single. day during TLotR? Did you get bored by that, or did you enjoy traveling along every step of the way with the characters?

I inquire because – I’m sure you can see this coming – Carson’s book is very much a day-to-day travel narrative. From time to time we leap lightly over a few days or weeks, but virtually the entire book is taken up by Leah’s journey from Georgia to California, and let me tell you, there’s nothing like reading about the wagon trains to make the reader appreciate modern life. Dust, mud, rivers, desert – ugh, that desert! – mountains, heaps of scenery everywhere you look, not to mention loads of people with gold fever heading west with their children, their livestock, and occasionally their dining room furniture.

I was exactly in the mood for this story, as I say, but – without checking reviews – I would bet there are some readers who were all, Wow, this is sooooo slow. Not that things don’t happen, but still, that is one looooong journey.

The second thing to know about the trilogy: Leah – mostly called Lee – is a great protagonist, surrounded by great secondary characters. Mrs. Joyner is my favorite of the secondary characters. She develops and changes a great deal over the course of the first book, in a way that reminds me of Barbara Hambly a bit. She starts off kind of . . . well, thoroughly . . . unsympathetic. I started rooting for her about two-thirds of the way through and was definitely cheering her on by the end.

Another element of secondary character development I particularly appreciated is how so many of the minor characters have their own stories, to which Leah herself is tangential. They come into, and more importantly depart from, the narrative in a way that is unusual for a novel but seems very true-to-life of how people would have come together and then separated during the westward trek across the continent.

I will just add that the trek is grueling, that there’s not much law in force for most of the distance or in California, and that sometimes people die. Carson doesn’t linger on these scenes, but . . . yeah, this was a brutal period of history in a lot of ways. From time to time Carson does soften some aspect of the journey a little – I mean, this is before the germ theory of disease, but the guy who was training to be a doctor is surprisingly up on the importance of cleanliness. Which probably some people who practiced medicine were, but really, the 1840s were still solidly within the Dark Ages of medicine, the era during which often going to a doctor lessened rather than improved your chances for survival. Still, Carson makes her presentation of 1840s medicine believable.

Which kind of leads into the third thing you should know about this trilogy, thus: although Carson does soften the edges of the era by handing Leah and many of the secondary characters more modern opinions and attitudes in order to make them sympathetic to modern readers, she also handles social issues subtly enough that these attitudes seem neither jarring nor preachy. That’s a feat otherwise excellent writers sometimes fail to pull off. Leah and Jefferson and several others despise slavery, but in these decades leading up to the Civil War, lots of people did feel exactly that way, so that’s believable. Similarly, Leah rejects the common view of Indians, but given Jefferson’s background, this is totally natural. Leah also furiously rejects the way society treats women as chattels, but given her immediate backstory this would definitely be something she’s questioned and come to fear and hate. All those modern mores are completely integrated into the character backstories and make sense in story terms.

Nor does Leah depend on having modern attitudes to render her sympathetic to the reader. Her defining characteristic isn’t a modern sensibility, it’s – in my opinion – a very old-fashioned sense of charity. She works hard not to resent Mrs. Joyner’s initial rejection, instead striving to see the situation from the older woman’s point of view. Later she works hard not to hate Reverend Lowry for what happens to his wife, but to be sympathetic to his point of view and his genuine grief. People have to be pretty bad – bad clear through, really – for Leah to totally reject and loathe them.

Leah’s certainly brave and generous and attached to her horse, but those are attributes we expect of any YA type of heroine today, right? Sometimes she gets angry and sometimes she gets confused and all that is pretty typical as well, and certainly sufficient for her to work as a protagonist. But the more I think about it, the more I think it is her sympathy and her concentrated attempts to view everything, with charity, from the other’s point of view, that sets her apart. Actually, this is something of an antidote to the modern day, where sometimes people seem to vociferously reject any point of view that differs from their own in the smallest detail rather than work for understanding. Leah’s sympathy for the points of view of others fits beautifully with the historical period of the novel, as it does seem like a virtue of that period.

Overall, two excellent installments in a vividly realized historical period. I’m glad the third is coming so soon – I know I’ll dive right in the moment it pings into my Kindle.