Okay, so, Knife is a MG story that has been on my TBR pile for quite some time – Brandy at Random Musings having started nudging me toward RJ Anderson literally years ago. I finally tried it, and yes, it is a delightful story, one that turns the concept of the fairy story somewhat on its head. 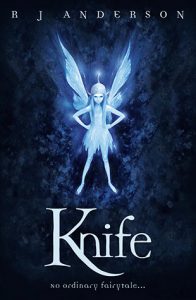 In Knife, the fairies are classic garden fairies — little female sprites with dragonfly wings who live (this particular colony) inside a large oak tree in the back garden of a prosperous estate. Only these specific fairies are in trouble: a generation or two ago, they lost nearly all their magic and they’ve been declining in prosperity and devolving culturally ever since. They are now hanging on by their fingernails. Since they have lost their cultural memory, most of them also have no idea how much they have lost. Also, they’ve fallen well below replacement level reproductively: On her death, each fairy is supposed to leave behind an egg that hatches into a new fairy child, only some fairies don’t leave an egg, and if this strikes you as a thoroughly unstable situation that cannot maintain the population over the long term, you are so right. Also, the few remaining fairies of this colony are ruled by a tyrannical queen, who possesses the only significant store of remaining magic and who demands, and magically compels, total obedience to her commands.

As you can see, this is truly an awful situation, though one which the protagonist, a young fairy named Bryony, has grown up with and considers normal. Luckily for Bryony, by chance no one knows her true name, not even the queen, giving her more freedom to act than would otherwise be the case. Luckily for everyone, she hatched with more than the ordinary share of curiosity and courage…

What you should know about this story:

The first thing you should know about Knife is that practically nothing is quite what it seems, most especially not the things that seem most obvious. Any adult reader, on first encountering the fairy queen, is going to instantly say, “Wow, how convenient for the queen that she happened to have been absent from the colony when disaster struck and every other fairy lost her magic.” But it turns out that situation is significantly more complicated than that. There is in fact a definite tendency for the backstory to twitch sideways just when the reader thinks she’s figured out what’s going on. The same for the roles of many of the secondary characters – Bryony is surrounded by characters who surprise her, and also surprise the reader.

The second thing you should know about Knife is that the fairies are not human. They’re really not. I so enjoyed figuring out what Bryony’s people are like – and what they should be like – and how they ought to have this complicated relationship with humans, and why Bryony’s colony doesn’t, and how their isolation from humans has affected them. It’s hard even at the end to decide whether the ideal relationship is mutualistic or commensalistic or parasitic; the story definitely left me wanting to know more.

The third thing you should know about Knife is that it handles the issue of physical disability with grace and sympathy, without inserting heavy-handed lessons for the reader, and (possibly even more important) without offering special magic solutions. There is no Poof! Be healed moment. No. For a while I thought that kind of overly simple ending might be coming up, but it didn’t happen. In fact, the actual ending left me thoroughly interested in what might happen next.

The fourth thing you should know about Knife is that the writing is very good, in the “invisibly smooth” category of very good. Anderson’s writing doesn’t draw attention to itself, enabling the reader to fall right into the story. I would imagine that many younger readers would love this book – and it’s one I think older readers can enjoy as well. This was the first of Anderson’s books I’ve read, but it won’t be the last.