Okay, I did take my laptop along with me this past weekend, but I didn’t wind up opening it. I promise I will work hard to make progress on one or another WIP in September. But this weekend was Conner’s and Kimmie’s first all-breed AKC show and I was just pretty involved with that, plus a friend of mine lives reasonable near Owensboro KY, which was the show location, so naturally I spent time with her. 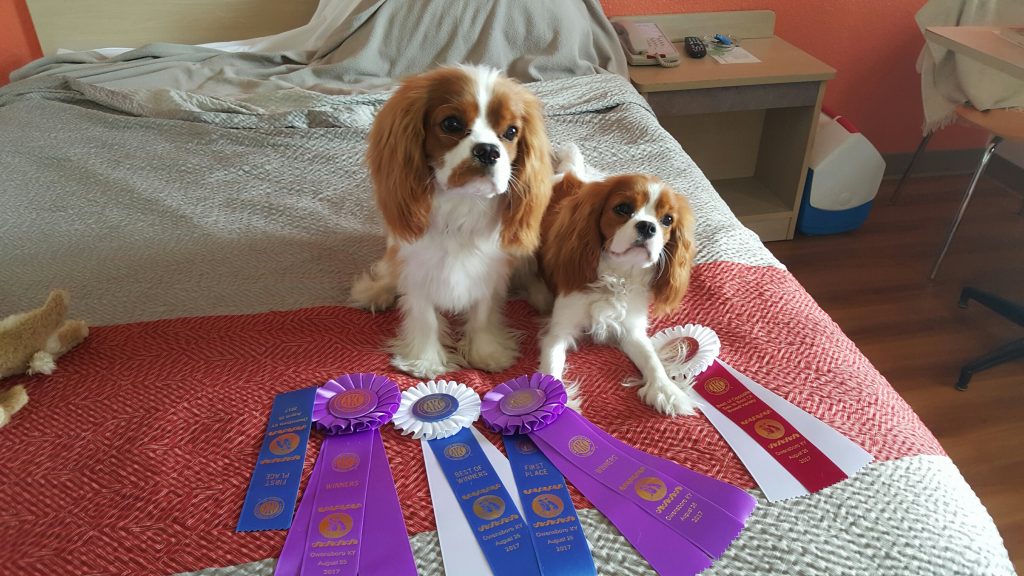 You can sure tell which is which, can’t you? Conner is such a boy, and Kimmie is so feminine, not to mention small even for a girl. Nice bunch of ribbons, huh?

For each breed, the best class boy gets Winner’s Dog, the best class girl gets Winners Bitch and then the boy and the girl compete for Best of Winners. The only way for animals showing in the classes to win championship points is to get Winners. They earn one, two, three, four, or five points based on how many other class animals they beat. If there is just one class boy, he cannot get a point because he doesn’t have anybody to beat.

Unless there are multiple class girls and then he beats them all to get Best of Winners. If that happens, he gets the girls’ points — called crossover points.

So one dog gets Best of Breed, the best of the opposite sex gets Best Opposite, and then there are the Winners of the classes, including the Best Winners.

In this particular show, my puppies were the only class entries that showed up, thus presenting me with a dismal show where you just have to chalk the whole thing up to practice because there is no way to win points.

However! On Friday, the judge — who is obviously a most confident gentleman — put Kimmie up for Best Opposite over two Grand Champion girls. This means that they suddenly count as class girls and Kimmie gets one point because she beat two girls (unfortunately she doesn’t get anything extra for beating finished champions). Then Conner beat Kimmie for Best of Winners and picked up her point as a crossover. So to my complete astonishment, both puppies earned their first championship point even though they were the only class entries.

So it was a very good weekend! Even though that didn’t happen again on Saturday — I would have been very much surprised if it had — I was delighted it happened at all. All the champions were quite nice. Beating those two girls on Friday was a definite feather in Kimmie’s cap and I am so proud of her.

Next: teaching Kimmie not to pull like an absolute demon. I have two weeks before the next show to see if I can get her to show herself off better …