So, as you might already know, The White Road of the Moon (now available for the bargain price of $10.22 in Hardcover, a tiny bit cheaper than Kindle) and Winter of Ice and Iron (which you can preorder this very moment for the low, low price of $7.99) both had their origin in the first unpublishable fantasy story I ever wrote: a sprawling 1500-page trilogy that taught me a whole lot about writing, especially when I took it apart and put it back together in these two standalones. This post describes that process in more detail.

The two stories are now set in quite distinctive worlds, with very different metaphysics and magic and all that, but their common origin remains evident in two ways (I think just two, but you can all judge for yourselves when Winter comes out).

One is the basic shape of the land in which the story is set: each has four or five smallish kingdoms distributed across a kind of peninsula, a landmass that is longer north-south than it is wide, separated from the rest of the world by some sort of barrier in the south. This is largely because I originally started drawing the map in the lower left corner and drew one continuous coastline up and around until I wound up in the lower right corner, and then threw up a mountain range in the south because that was the bottom of the page. I always have a mild tendency to draw landmasses that basically look like this, though if you flip through my books – I think they mostly do have maps in them – you’ll see I have sometimes fairly successfully resisted that tendency.

In The White Road, as you may know, the southern barrier is the Southern Wall, a barrier of impassible mountains raised up by magic long ago in order to protect the peninsula from the threat of conquest. In Winter, it’s the Wall of Winds, also called the Wall of Storms and so on. This was also magically created to protect the northern peninsula, though this time from a really dire threat of total destruction. For all anyone knows, nothing now lies to the south but maelstroms of chaos and dragons (these are thoroughly chaotic dragons, totally different from the dragons of The Floating Islands or the one in House of Shadows. Coming up with extremely different conceptions of dragons for each book is a delightful part of worldbuilding … well, leave that for later. Back to names!

Which are the other main way in which these two worlds still resemble each other. Lots of the characters and lots of the place-names from that original trilogy got assigned to one or the other of the new books, so there are common elements in the names of people and places; far more so than, say, the names from Feierabiand and Casmantium in the Griffin Mage trilogy. For example, there is the common diphthong “iy”, which I basically threw into a bunch of names to say This Is Not English to the reader, lending a foreign flavor without making pronunciation especially difficult. (Just pronounce Tikiy like Tick-EE and Deconnniy as Deck-CON-ee.). There are also lots of vowels and various letters are more common than English; others less common.

In the same way that I changed the nature of the southern barrier and just how it got there and exactly what threat it protects the northern lands from, I stripped nearly all of the original diacritical marks from the names in one of the books and exaggerated them a trifle in the other, basically as a cosmetic change to indicate a little more firmly that This World Over Here Is Not The Same As That Other World Over There. There were plenty of diacritical marks in the original fantasy because they’re just kinda pretty, but the way they are now used in Winter of Ice and Iron is more carefully standardized because (as the Griffin Mage trilogy made clear to me) some readers really care A LOT about pronunciation.

Here are some typical names from each book:

From The White Road 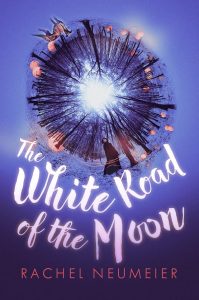 Jaift Gehliy…..which was originally Jaïft, but that accent mark didn’t do anything to the pronunciation, which for me was simply Jayft, so there was no reason not to take out the mark.
Niniol…..which was originally Niniöl; again, I think it looks like Ninn-ee-ol with or without the mark.
Diöllin…..which retained the diaeresis, also called in French the accent tréma, because I just think the name looks so much better with the accent mark than without. This led me to declare that in this world, older, archaic names might still have diacritical marks, lost in the modern era during which the events of the story occur. Thus we have:
Tiamanaith……the name of a modern woman, versus
Aseraiëth…..the name of a woman who lived a long time ago.
And we also have Carad Mereth as the modern name of a man who once was known as Laìdomìdan – a name that picked up accent marks specifically to signal that it’s an archaic name.

Modern place names in The White Road are also simple: Riam, Surem. This is mainly to give readers a break from more complicated names, but the reader is supposed to understand, without having to figure it out, that some sort of unexplained historical convention underlies variants of names for associated places: Cora Tal, Cora Talen, Cora Diorr; also, if you look at the map, Elan Tal and Elan Diorr and so on. The author doesn’t have to explain this kind of thing for it to add a sense of history and depth to the world; the reader is just safe in assuming there is some kind of historical, philological reason for these kinds of names. (No, I don’t know the history of naming in this world; I just know there is such a history.)

The double “rr” at the end of the word “Diorr” isn’t something I pronounce, incidentally; though if a reader felt like rolling it, that would be fine. It’s just there to say again This Is Not English, since the double “rr” in English never occurs at the end of words.

But let’s move on and contrast the above names with some from Winter.

Careful reading will make it clear that “Innisth” is the personal name, “Maèr” the family name, and “Eänetai” the name that indicates Innisth Maèr rules the province of Eäneté. (I never established rules for the lower-case middle names because it never became important.)

Similarly, we have Raëh, a province and city; Kehera irinè Elin Raëhema; and Raëhemaiëth. The name of the Immanent is always longer, the ruler’s name medium, the province name mostly shorter. I don’t swear that I stuck to that every single time, but I kind of had that pattern in mind.

You’ll see other names of that sort all through the book, and you have my agent, Caitlin, to thank for the similarity of town-title-Immanent names, because they didn’t start off that way but she just insisted that the names were too confusing and kept prodding me to provide more cues about what person and Power belonged to what place until I eventually did it her way. I’m sure she was right and anyway it wasn’t that much trouble to adjust the names.

As you can see, though not all the names have accent marks, lots do, and plenty have more than one. As it happens, all the accent marks work pretty much the same way in the world of Winter as they do in French. Thus:

Reiöft: The “ei” vowels are pronounced together, but the accent tréma, also called a diaeresis, indicates that the “o” is sounded separately. This is the same use of the mark as in the word “naïve.” You can think of it exactly that way every time it’s used. I also consider that it adds emphasis, so this name would be pronounced Ree-OFT.

Verè: The accent grave deemphasizes the vowel. You will see it mainly on an “e” at the end of the word, and it almost renders the terminal “e” silent. If that “e” is sounded at all, it’s as in “eh,” a breathy, half-swallowed vowel. When you see an accent grave in the middle of a word, as in Quòn or Caèr, it still deemphasizes that vowel. The former name is pronounced with a single shortish vowel sound, a lot like Kwon; the latter becomes more breathy, like Kehr.

The accent aigu, or acute, is used to accent a syllable – but in French it also indicates that the é should be sounded as “ay.” I intended the latter. You nearly always see the acute on a terminal “e” and it sounds that “e” as an “ay.”

So you see, even though to begin with I fundamentally threw in the accent marks to look pretty, I did make a reasonable attempt to standardize pronunciation before I finalized the spelling of the character and place names. I’m pretty sure the above rules are more or less what I was using when I subvocalized the names. But again, hey, if you like other pronunciations for any of the names, that won’t bother me one bit.