Or do I mean “confitted”? What is the adjective form of this word? The question seems rather unsettled if you just google the various forms.

Either way, this recipe was both good enough and interesting enough that I would like to share it with you all.

I don’t usually take a portion of anything I cook to my parents, because most often it is Indian; Thai; spicy; contains chickpeas, cilantro, or artichokes; or involves combination of these factors, none of which generally appeal to them. (Desserts are different, but alas, these days I don’t make that many desserts except for special occasions.)

But this was excellent, and much to everyone’s taste. Forthwith:

The original recipe, from Bon Appetit, is here. I did not make this recipe quite according to the directions, but I stuck fairly closely to the original, for me. The recipe might seem like a little too much trouble, but it can be made in stages and the actual work involved is pretty limited, especially in the somewhat less involved version I made. So here we go:

1½ bone-in skin-on chicken thighs, which is, it turns out, four. I almost never buy bone-in chicken, but bought a big package because it was more economical that way. This was good enough I’ll probably use the rest of the chicken thighs to make it again.
Salt, pepper
1 bulb garlic, the outer skin rubbed off, halved (not clove of garlic, bulb).
2 shallots, halved, or if you can’t find them – generally I can but this time I couldn’t – one small onion, skinned and quartered.
4 sprigs thyme, or say half a tsp or so dried.
2 bay leaves
4 juniper berries, which I’m sure aren’t crucial but I happened to have some.
1 C olive oil, and you have probably heard that lots of so-called olive oil is adulterated with cheaper oils, so you may want to check online for unadulterated brands, which is what I do every time I buy olive oil because I never remember that sort of thing.

Then later you will need:
1 onion, chopped
4 cloves garlic, minced
½ of a 14.5-oz can of whole peeled tomatoes, crushed. I don’t know why you couldn’t use the whole can and next time I will, as the tomatoes were hardly overpowering in the final dish.
4 C cooked large white beans, from 1½ C dried, plus 1 C of the cooking liquid, but I will add that since I’m not a purist when it comes to beans, I actually used two 15.5-oz cans of cannellini beans. They were delicious. Three cans would probably not be too much.
2 andouille sausages, or since the ones I got came four to a package, I just used all four.
1 thick slice sourdough bread, in crumbs, tossed in oil, for a garnish (I skipped this step).

You can confit the chicken one day and then hold it for two or three days before you finish the dish, which is why it really is not that much trouble.

Season the chicken with the salt and pepper. Try not to forget that step as I forgot it and then found the chicken slightly underseasoned at the end. Place in a small Dutch oven. I didn’t know there was any such thing as a small Dutch oven. I certainly don’t have such an item. I used a saucier that was just barely large enough to hold all four chicken thighs in a single layer. Add the garlic, shallots or onion, thyme, bay leaves, and juniper berries. Pour the olive oil over everything and bring to a bare simmer on the stovetop. Then put the pan in the oven, covered, and bake at 225º for 2½ hours. That is 225º, not a typo. I turned the chicken thighs over once, but it didn’t say to. So far, as you can see, the active preparation time is really minimal. You are supposed to cool the chicken overnight in the oil. I poured everything into a biggish Tupperware container and stuck it in the fridge for three days, until I was ready to go on.

Now, when you’re ready to proceed, scoop about 1/3 C of the fat off the top of the container and put that in a pan. I am much too lazy to bother measuring it; I just spooned a generous amount into the pan. Heat this fat over medium heat and sauté the onion and garlic for ten minutes or so. Squeeze the confitted garlic cloves out of their skins into the pan. Add the tomatoes and cook five minutes. Add the beans – since the recipe called for a cup of the cooking liquid, I didn’t drain the cannellini before I added them. Add the broth from the confit (the broth, not the rest of the fat, which you can reserve for frying eggs or something). Bring everything to a simmer, pour into a 9 x 13” baking pan, and nestle the confitted chicken thighs into the beans. Arrange the andouille sausages around and between the chicken thighs, wherever they fit. Bake uncovered at 350º for two hours. Yes, two hours. I rotated the pan back-to-front halfway through, which you should probably do unless your oven bakes more evenly than mine. You can finish up by topping the whole thing with the crumbs and baking another twenty minutes if that suits you, but I left out that step. The active prep time for this step was maybe twenty minutes.

The skin on top of the chicken thighs crisped up beautifully. (Of course the skin on the bottoms of the thighs did not, but if you have a lot of dogs hanging around hoping for a share, that problem takes care of itself.) The sausages also crisped up, and the beans held their shape but were wonderfully soft and creamy, and basically the whole thing was *really good.* This is definitely a dish you could make for a special occasion. If you do try it, I hope you enjoy it as much as my family did. 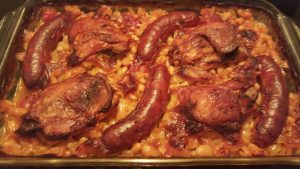 I feel I should add that the baking dish did get quite a baked-on crust around the edges. I took it outside to the big sink where, in the summer, I bathe the dogs. I set the dish in that sink, filled it up with hot water, and left it overnight. It will no doubt occur to you all that it would be more practical to line the baking dish with aluminum foil and just throw the foil away. That will make the clean-up as easy as the preparation. Next time I’ll remember about the foil.