So here I am back in real life, more or less, having returned from ArmadilloCon. Which was a great experience; I met so many neat people and the whole convention was just a pleasure. Also all legs of the plane flight were smooth and completely trouble-free, which I’m sure is generally the experience, but you’d never know it from social media.

Anyway, last night, having finished one book and not really being inclined to start another, I decided my Samples folder on my Kindle was getting out of control and it was time to do something about that. It was up to 73 samples; I don’t know, maybe all of you with ereaders have more samples than that on them. It seemed a little over the top to me. So I took a couple hours to open 52 samples and decide whether to keep it or delete each one (the other samples I knew I wanted to keep, so all those were safe from the Scouring of the Samples Folder.) I am now down to 47 samples total, which doesn’t seem quite so over the top, although I guess it is still quite a few.

Of the 52 samples I looked at, I wound up deleting 26 samples and keeping 26, which is mildly interesting because I wouldn’t necessarily have expected a perfect 50% ratio like that. It’ll probably never happen again. Anyway, in case you are mildly curious, here are the ones I kept:

I am not surprised to note that I had to read a lot more of a sample before deciding to delete it vs often just a sentence or two before deciding to keep it. There were just a few where I read the whole sample and then decided to keep the sample. Some of the ones I kept have just amazingly catchy openings. I don’t mean that these are the most appealing samples overall, just that the first couple lines are particularly captivating. For example, there is this one:

1a. The Man Who Rained

The rain began with one gentle tap at her bedroom window, then another and another and then a steady patter at the glass. She opened the curtains and beheld a sky like tarnished silver, with no sign of the sun. She had hoped so hard for a morning such as this that she let out a quiet cry of relief.

That is a rather beautiful opening. The lines are poetic and immediately create a sense of mystery. Going on with the first couple pages, I will add that this story does not immediately look, well, happy. But it is certainly lovely and I won’t hesitate to go on with it.

I recently had a chat with someone about authors who write on the edge between fantasy and the real world and Ali Shaw came up, which is why I picked up a sample of the above book. Also this one:

1b. The Girl with Glass Feet, by the same author

That winter there were reports in the newspaper of an iceberg the shape of a galleon floating in creaking majesty past St. Hauda’s Land’s cliffs, of a snuffling hog leading lost hill walkers out of the crags beneath Lomdendol Tor, of a dumb-founded ornithologist counting five albino crows in a flock of two hundred. But Midas Crook did not read the newspaper; he only looked at the pictures.

Which is both poetic and funny. Not that it strikes me as dumbfounding to see five albino animals in a group of 200; look at the occasional park where white squirrels outnumber grey ones. You don’t need a terribly large number of carriers of albinism before you get 2.5% albinos. Still, that’s definitely an engaging opening. I understand this story is something of a tragedy. Still, I will likely go on with it. Also, pretty cover: 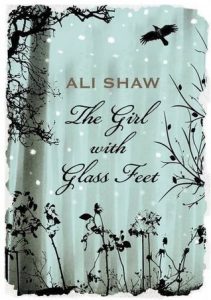 This next one is quite different.

You don’t just fall into supervillainy. It’s not like theater or baseball or the after-school club you join because all your friends are members. Supervillainy is a way of life. It’s something you must want with every fiber of your being. You have to wake up every morning thinking, “Hey, this world is mine for the taking,” and mean it. Most people don’t comprehend the passion needed to be successful in such a thankless field, one that boasts such a low rate of success.

Here’s another that I particularly liked:

Baltimore was a beautiful, twinkling, probably hostile collection of lights up ahead, half-hidden by two sheltering arms of land and one massive fortress. The topsail schooner Left-Handed Fate slid like an elegant knife through the water, trying as hard as ever she could not to look like a British privateer as she passed under the guns of Fort McHenry.

4. A Corner of White

Madeleine Turner turned fourteen yesterday, but today she did not turn anything.

Instant keeper. What an clever, intriguing line that is. 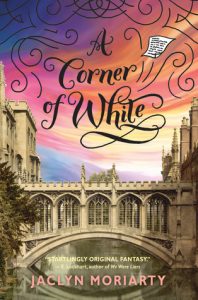 And I want to mention one more sample that that provides an interesting counter-example to all the above:

I nearly deleted it after the first glance. It opens this way:

Jael Thompson looks at her reflection in the bathroom mirror and frowns. She pushes back her curly black hair and stares into her green eyes so hard that the rest of her features blur.

Oh, ugh, first person present tense. Kind of tends to be my least favorite. It *can* work, though, obviously, so after that first automatic flinch I went on. This is one I was leaning toward deleting, though. I read the whole first chapter leaning that way. There were things I liked about it, but more things that made me think well, lots of other books here that seem more promising. Then . . . the kicker at the end of chapter one caught me.

So it’s not the case that everything necessarily depends on the first two or three sentences, or the first page. That’s an ideal place to hook your reader, obviously, but if your reader will stick with you for the first chapter, a hook right there is an additional way to keep the pages turning.

5 thoughts on “Clearing out the Samples folder”