In discussions of fantasy worldbuilding, you hear a lot of talk about magic systems. About how they need to have rules. And then you wind up with something like Dungeons and Dragons or Brandon Sanderson’s various novels, where the magic is as codified and quantified as a video game.

This bears very little resemblance to magic in the real world.

By that I mean magic as people have believed in it for millennia, magic as it has fit into the structure of real societies….

Folk magic is difficult to talk about because it isn’t some kind of unified system whose underlying principles can be laid out in a paragraph or two. Folk magic is nailing a horseshoe above your door for protection (always open side up, so the luck doesn’t drain out). Folk magic is eating black-eyed peas on New Year’s Day in the hope of bringing prosperity. Folk magic is trying to blow out every candle on your birthday cake in a single breath so that your wish will come true. It’s superstitions and habits people don’t even think about as superstition, because they’re just what you do, and the suggestion that you should do otherwise would be met with confusion and disbelief.

This all blurs into a kind of magic one might call “Fairy tale magic,” which is also thoroughly opposed to a magic-as-science scheme with codified rules and axioms and theorems.

I’m always being nudged, more or less forcefully, to codify magic in my books. This is awkward because I’m more inclined toward fairy tale magic, where the rules are understood without being pinned down for inspection.

In fairy tales, If you’re in the forest and an animal speaks to you and asks for help, probably you should help it. Because that’s just what you should do. When you step into a witch’s cottage, you’ll probably have to pay a price to get out again, and it may not be a price you want to pay. When you set foot on a road, you never know where you might wind up — but if you leave the path, you’ll certainly fall into an adventure. True love can win through any contest or obstacle.

None of that is exactly folk magic. But it’s certainly not the systematized magic-as-science that editors generally prefer, either.

I think you find fairy tale magic *mainly* in fairy tale retellings, but also in fantasy novels that are original fairy tales, a category that is unrecognized but seems to me discrete. It’s exemplified by most of Patricia McKillip’s books, some of RA MacAvoy’s books, of course some of my own books, and a handful of other titles. I’d like to see more like that, which means I’d like to see less of a demand for codified magic systems.

And yes, it would also add depth to many fantasy novels to add elements of folk magic, as Marie Brennen suggests:

Folk magic is about belief. It’s a net of delicate little threads that can rarely move the whole plot, but they connect people to each other, to the landscape they live in, to their religion and their history and their fears and their hopes for the future. The presence of fireball-hurling wizards would not, I think, erase the need for that kind of thing in people’s lives; if anything it might make the need stronger, as the common folk now have to fear not only the swords of the nobility and the judgment of harsh laws and the vagaries of the natural world, but the arcane powers of the magical elite. And on a narrative level, it adds a whole layer of texture to the story. A child is sick and her mother tries cures that have nothing to do with modern germ theory or pharmaceuticals; maybe it helps or maybe it doesn’t, but either way it tells you a lot about the mother and the world she lives in, and it makes the mother seem more real. Because when we face problems like that in real life, we cling to any belief that offers us hope and that sense of control. (Yes, even today.)

One story I can think of where ordinary folk put milk out for fey creatures is Arafel’s Saga by CJC. There is a story that is more a fairy story than not, even though I never seem to think of it that way. It is, though. I’m reading something right now, Chains of Gold by Nancy Springer, which also fits: ordinary people never eat elderberries because of a folk belief the shrubs are associated with death. Of course Nancy Springer also often writes fairy tales; I should think of her more often when I am listing authors who do. 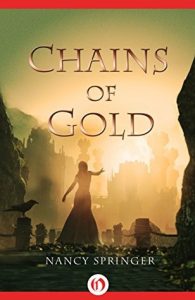