So many cultural practices are literally unimaginable until you encounter them. Then they’re suddenly, vividly, real for you, as they always were for the people who grew up in that foreign culture.

One such example is ghost marriage, as seen in The Ghost Bride by Yangsze Choo. 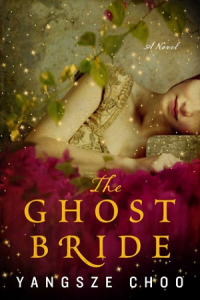 I’m reading this book now; I haven’t gotten very far yet, but I can see the description and setting are strengths. This includes in particular the unusual cultural practice of ghost brides.

One evening, my father asked me if I would like to become a ghost bride. Asked is perhaps not the right word. We were in his study. I was leafing through a newspaper, my father lying on his rattan daybed. It was very hot and still. The oil lamp was lit and moths fluttered through the humid air in lazy swirls.

Here, in colonial Malaya, we have a custom where for example a concubine who has died may be married after death so that she’ll have higher status as a wife in the afterlife. Or, as in Li Lin’s case, a wealthy and powerful family wants her to become a ghost bride for the family’s only son, who recently died under mysterious circumstances. Night after night, Li Lin is drawn into the “shadowy parallel world of the Chinese afterlife, with its ghost cities, paper funeral offerings, vengeful spirits and monstrous bureaucracy . . .”

This is all wonderful background for this story. It is also an example of the kind of background that would be wonderful in a secondary world fantasy. You could take something like this in all kinds of different directions, in a story with a kind of Malaya flavor to it or otherwise. Perhaps widows (or widowers) could technically still be married, either to their own advantage or otherwise. I mean, think of this old custom from the Bengal region of India:

The death of her husband left my great-grandmother dazed. Afterwards, she did what most widows like her, Hindu and of high-caste pedigree, had to do to repent for the death of her husband. She scrubbed her hair clean of sindoor, the vermillion smear between the parting of her hair, initially put there during marriage ceremony as a mark to signify she and her husband were permanently in union. She donned a blanched white sari, an outfit she would wear for the rest of her life.

From then on, she would eliminate onion and garlic, alliums thought to conjure sexual energy, from her diet. She would stop eating red lentils for the same reason—these were, apparently, edible pulses as potent as aphrodisiacs. She would stamp out meat and fish, staples of cooking in Paschim Dinajpur, and stick to a rigorously strict vegetarian diet. She would be restricted to one meal a day, mid-day. At night, she would have puffed rice, khoi, with milk. Following this odd, constricting decree was culturally expected of her and other Hindu, high-caste widows in Bengal.

This is another custom that is utterly unexpected by a modern American reader. I mean, wow. Now suppose you build this into a secondary world, but also add a competing custom of ghost marriage that offers widows a chance to either still be married even though their husbands have died, or perhaps marry again in some other ghost marriage.

This could build such a rich and interesting background for your world, and of course it immediately presents many possible conflicts and problems depending on which way you take it.

I would personally draw the line at foot binding, though — a custom mentioned in The Ghost Bride, though thankfully not practiced in Malaya of time. One can do all kinds of things with gender roles and expectations, but foot binding was too horrible for me, at least, to ever put any form of the custom into any fictional world.