I know this is a fantasy blog, but for this one I want to appeal to the third (and most famous) of Clarke’s laws, which is “Any sufficiently advanced technology is indistinguishable from magic,” because I want to talk about the scienciest, most extrapolatey, most out there science fiction, which isn’t overtly different from fantasy except in aesthetic.

This comes from my musings about writing a story set in orbit of a neutron star, and also because I was recently discussing with a friend where to find the hardest SF.

I get a lot of ideas when I read other authors. I love seeing what science people know and transform into story, and I love seeing that unique kind of creative ambition.

Some caveats: When I looked in my book shelf for examples to show a friend, I came up with three authors and six titles…

The authors are Hal Clement, Robert Forward, and Steven Baxter. Of the six books mentioned, I’ve read Rocheworld, and I think that’s it. Hard-hard-hard science fiction is not really my favorite thing. 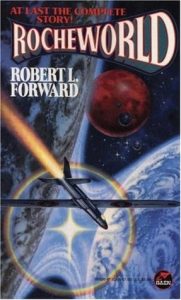 Nevertheless, even though I’m not sure what all suits the subgenre of “hardest of hard science fiction,” I do think there are several well-known titles that deserve consideration. Some were even lucky enough to get Michael Whelen covers back in the day: 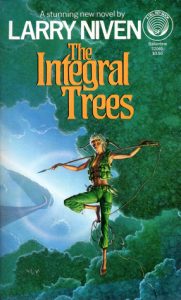 Niven’s Ringworld series is quite hard, with plenty of emphasis on the science and imo enough characterization so the story isn’t offputting to character readers like me.

John Stith’s Redshift Rendezvous did all this crazy stuff with relativity. 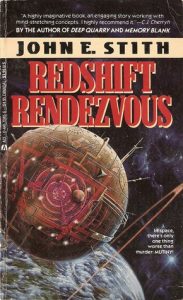 Complex characterization is not this book’s strength, but I liked it. However, for me physics is never going to compete with biology, and so I greatly preferred this much more recent title: 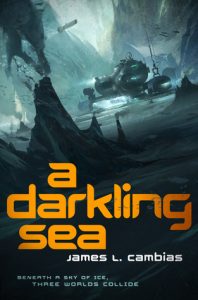 Would James Cambias’ A Darkling Sea count among the-hardest-of-the-hard? It’s got plenty of physics in the background. Plus more complex, interesting characters — the humans rather less so than Broadtail.

While we’re on the subject of physics vs biology, I found the former plausible and the latter much less so in the highly enjoyable Seveneves, the only book by Stephenson that (dispite the rather implausible biology) I ever really got into.

Surely the Very! Detailed! Orbital mechanics and stuff means that this one counts as really hard, even though Stephenson never actually explained why the moon broke up in the first place.

Okay, if you’re into hard SF, what’s a title that springs to mind for you?

6 thoughts on “The hardest of hard SF”