So, this post at tor.com caught my eye: Tor.com Reviewers’ Choice: The Best Books of 2017—So Far

… mainly because I have read absolutely none of these. Gosh, so far behind and the year’s only half gone!

But if you glance through this post, I bet you will be able to pick out the single title that most stands out for me.

Want to try it?

Okay, did you click through? Here is the one I just have to try: 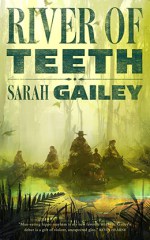 Hah! No doubt that is ridiculous! And yet, what a wonderful idea! Nor is it quiiiite as impossible as it sounds: did you ever happen across this post at Wired: THE CRAZY, INGENIOUS PLAN TO BRING HIPPOPOTAMUS RANCHING TO AMERICA ?

IN THE EARLY years of the last century, the U.S. Congress considered a bold and ingenious plan that would simultaneously solve two pressing problems – a national meat shortage and a growing ecological crisis. The plan was this: hippopotamus ranching….Hippos imported from Africa and raised in the bayous of Louisiana, proponents argued, would provide a delicious new source of protein for a meat-hungry nation. In the process, the animals would gobble up the invasive water hyacinth that was killing fish and choking off waterways. It would be an epic win-win. A bill was introduced in Congress, and newspaper editorials extolled the culinary virtues of “lake cow bacon.”

… Jon Mooallem describes the hippo ranching scheme and the story of two fascinating men behind it: one a modest frontiersman and soldier of fortune, the other a self-aggrandizing con man. Both were spies. Each was sworn to kill the other. But the great cause of hippo ranching brought them together.

My goodness, you could not come up with a wilder or more delightful idea for fiction. Yet apparently this is more or less based on reality? It’s also the jumping off point for Gailey’s novel. Or, looking at Goodreads, maybe this is more a novella? It’s not about the actual historical people, apparently, which is almost too bad given the description above. But what a wonderful tidbit of alternate history to pick up!

River of Teeth is getting widely divergent reviews, but I’m definitely picking up a sample. Because, hippos!

2 thoughts on “So many books, so little time”