It was the biggest eruption for 700 years but scientists still can’t find the volcano responsible….What Alfonso’s wedding party (Alfonso II of Naples, October 1465). witnessed may have been more extraordinary than anyone imagined. Many thousands of miles away in the tropics, a giant volcano was making geological history. This was an eruption so big, it produced an ash cloud which enveloped the Earth and led to the coolest decade for centuries….The blast itself would have been heard up to 2,000km (1,242 miles) away and created a tsunami which caused devastation hundreds of kilometres away. In terms of scale, it surpassed even the 1815 eruption of Tambora, which unleashed energy equivalent to 2.2 million Little Boy atomic bombs and killed at least 70,000 people. Traces of the eruption have been found from Antarctica to Greenland.

The thing is, scientists can’t find the volcano that did it. What’s going on?

What a fun post! Also a little alarming, since of course we could see that kind of eruption again. Any time, probably.

This post is both well written and interesting and kind of horrifying in its vivid descriptions of the effects of giant volcanic eruptions. In Sweden, crops failed and grain stores emptied. Across Europe, trees stopped growing. In China, tens of thousands of people froze to death. Months after, it snowed non-stop for 40 days below the Yangtze River (the same latitude as Northern Mexico) and the Yellow Sea froze up to 20 km (13 miles) out from the shore. On the other side of the world, the Aztecs were faced with the greatest famine experienced in pre-history. I mean, wow.

If you want to pit your protagonist(s) against a terrible crisis, well, sounds like preventing or dealing with a giant volcanic eruption might fit the bill. Or you could add an eruption like this to one or two other factors of your choice and create a post-apocalyptic setting. But any way you slice it, this is the kind of event we would all prefer remain fictional for a good long while to come, like until we have special magic technology to deal with it. 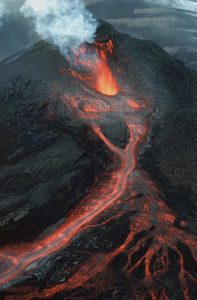