So, waaaaay back in the day, I read and really enjoyed Jumper by Steven Gould. It came out in 1992. Well, I liked it a lot. It’s not a flawless story by any means, but it’s a near-perfect revenge fantasy where the kid getting revenge is basically just really nice, except to people who don’t deserve it. 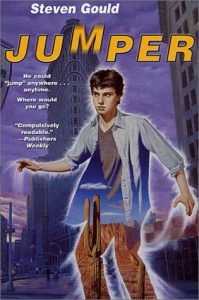 In an extreme moment of stress, Davy jumps – teleports – to a place of safety. Then the rest of the story is about him gaining far more control over his new teleportation superpower. He reconnects with his estranged mother and deals with his abusive father and falls in love and brings various nefarious types to justice and it’s all very satisfying to the reader, even though it depends on Davy being a tiny bit more socially competent than seems entirely plausible for a kid with his background. Or maybe I should say “because” instead of “even though.” If you, as the reader, want to project yourself onto the protagonist, then of course a protagonist who’s extra competent and extra nice and extra moral and extra socially competent (even though that makes no sense whatsoever) can be juuuust the right protagonist.

So, yeah, really fun book. I read it a bunch of times and then many years later found out (I think from a commenter here) that Gould had gone on to write three more books in the series. Not counting the movie by the same name which was based loosely (very loosely) on the book, and which I never saw because who wants to watch a movie that goes off in wildly different directions from the book you already like?

Anyway, I finally got around to reading the whole series, which I liked a lot.

Gould wrote these other books years and years after the initial publication of Jumper. I’m guessing the movie nudged the publisher (Tor, I see) into suggesting Gould go on with the series, but I don’t know. Anyway, Reflex, Impulse, and Exo. The second book takes place ten or so years after the first. Gould believes in true love, or at least he does in this series, because Davy and Millie have a rock-solid relationship that’s really a pleasure to read about, even though they spend most of the book separated. Lots of solid, long-term relationships in this series, some more central than others, some quite peripheral, but plenty of them and all solid. It’s a great antidote to the more gritty worldview that sometimes seems so prevalent.

Davy spends essentially the whole of Reflex a prisoner, but really, even though the bad guys are definitely Evil and he does not have a good time, the book offers a fairly low-stress reading experience because the reader never doubts for a second that Davy and Millie will prevail in the end. I will add that for most of the book, I could not see how in the world Good was going to triumph. Gould did a bang-up job designing a great scenario for holding a teleporter prisoner. Davy has to be extremely smart and resourceful to escape and defeat the bad guys, not to mention extremely lucky to be married to Millie. Who (mild spoiler, this comes right at the beginning) has also developed the ability to teleport. It turns out that if you get carried on enough jumps by someone, you may find, if faced with a dire life-threatening situation, that you’ve picked up the knack. That would sure be cool; also, it’s intrinsic to the story in Reflex, which is just about as much Millie’s story as Davy’s.

Okay, then in Impulse, we leap forward another sixteen years. Impulse is primarily the story of Cent, Davy’s and Millie’s daughter (real name Millicent, so you see where the nickname came from). We do get brief sections from Davy’s pov, and Millie’s, but mostly it’s Cent. She jumps for the first time (in a dire life-threatening situation, which I guess would slow down discovering you’ve also got the knack, but I can tell you right now I’d be figuring out ways to fake it if it were me). And once she can also teleport, what does Cent want more than anything in the world? That’s right: to go to high school like a normal kid.

Cent is just as competent and resourceful as her parents, in a fairly believable way, although she runs into trouble a little more extreme than, say, your standard high school bully. She makes friends and has her first romantic entanglements and gets her heart broken and meets a better guy and did I mention high school bullies? Because this is a great superpowered-teen-in-high-school fantasy.

Toward the end her parents’ old enemies turn up, briefly. Davy really is a very competent guy, and his daughter has thought up some interesting new applications of the teleportation skill that also turn out to be handy . . .

. . . and in the fourth book Gould puts it all together. I mean, all the different related aspects of the teleportation talent that Davy and Cent have come up with. Gould plainly asked himself what he would do with all those skills, came up with a neat idea, and worked it out in great detail.

Exo is also primarily Cent’s story. I must say, I didn’t see her, um, choice of careers coming. I’m not nearly as technologically oriented; I’m sure I would have come up with something a whole lot different in her place. It’s neat, but lot of the book involves fairly detailed descriptions of the technological development of Cent’s ideas, and I admit I skimmed over a lot of this. I found I was more interested after Cent really starts her new career. I liked the new minor characters that were introduced, but all of them remained quite peripheral while the technology took a more central role. Gould does finally tie off the continuing arc involving the bad guys, but this seems like something of an afterthought compared to the loving detail with which he treats every aspect of Cent’s new career. This is definitely a lower-stress, slower-paced story than any of the previous books.

Honestly, the feel of each book in this series is pretty distinctive, substantially more so than I normally expect from one series.

Jumper was written ages ago and I do think if you read all the books in a row, you can see Gould’s skill as a writer develop from the first to the second book, both in plotting – this one is choppy – and in developing characters and character relationships within each story. I still find it engaging now, but I liked it better as a younger reader. I suspect if you like it, you might well like Quartershare by Nathan Lowell; also very likely Pathfinder by Orson Scott Card. For different reasons, Jumper reminds me of both of those. It’s the highly competent young protagonist and also, for the latter series, the focused superpower, although Card’s protagonist is not a teleporter.

Reflex is a far more intense reading experience. It’s an interesting contrast in lots of ways, because today Jumper would clearly be categorized as YA and Reflexis a way out if you’re clever and determined and lucky. Anybody got a suggestion for a story of that type? I feel like I have one in the back of my mind, but I can’t seem to pull it out.

Impulse is a school story that again steps down in intensity but offers an engaging YA story. If you like school stories, this is the one for you.

And Exo is once again an adult story, less compelling but a decent finish to the overall series. Its emphasis on detailed technology reminds me of Seveneves, though of course without the end of the world stuff. It’s a much “harder” SF type of story, even though everything is made possible by magical (well, totally unexplained) teleportation.

And the whole thing is a fun and worthwhile series, likely to appeal to quite a lot of readers, I think, different as the books are from one another. For one, I think it would appeal to my dad – probably the more adult installments more than the YA ones. Luckily I have the whole series in paper, so it’ll be easy to pass his way.