This weekend, I and two of the gang attended an obedience/rally show a couple hours from my home. Very nice venue in Wentzville: indoor, air conditioned, really excellent flooring, big enough not to be too crowded by the hundred or so dogs and their various owners, huge lawn area to walk the dogs. Beautiful weather too. Couldn’t have asked for a nicer venue for a small show.

Also, my dogs did pretty decently. Ish finished off his Rally Excellent title – he only needed one more qualifying score and got it on Saturday, so Sunday was just-for-fun for him. He’s not fabulous at the Excellent level, but he’s okay. He knocked one of the jumps down Sunday or he would have scored in the mid-eighties both days. We lost some points on the Stand-your-dog-Leave-your-dog-Sit-your-dog-Front-Finish exercise, which is just as complicated as it sounds, and a few points here and there besides that. If I were going on with him I would want a clearer understanding about the difference between the Moving Stand and the Moving Down and the long-distance signals for Sit and Down, and to tighten up his heeling around distractions like, oh, air conditioner vents and stuff. (He sometimes pauses to look at things). But he does okay.

Honey did REALLY well in Advanced, better than I thought she would. I’d sort of thought I finished that title years ago, before she earned her breed championship, but apparently not. So I worked with her a bit and put her back in the ring to get that Advanced title. I didn’t actually think she was necessarily ready, but she totally was. She would have scored a perfect 100 both days except she didn’t do the jump either day. She is fine jumping any weird obstacle I point her at, except in the actual ring, where she doesn’t seem to quite get that the thing is a jump. What we need is fifteen minutes in a real ring, training rather than showing, and I expect she would figure it out and be fine forever after. But she finished her Advanced title and I may not bother fixing the issue with the jump unless I decide to show her in Excellent.

Here they both are showing off their New Title ribbons. 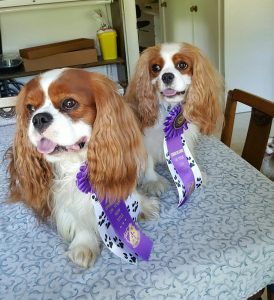 Also, two hours each way for two days is a lot of driving time, so I finally finished Magic Marks the Spot. It’s a MG fantasy novel with magic! and pirates! and quests! And a gargoyle, and good friends, and bad fathers, and worldbuilding that is frankly a touch ridiculous.

I thought a MG novel would be perfect for audio – fast paced and perhaps not too serious. This one had good reviews, so I gave it a try. It was cute and fun, but it also turned out to be a little young for me, for a different reason than usual when MG doesn’t work out that well for me. 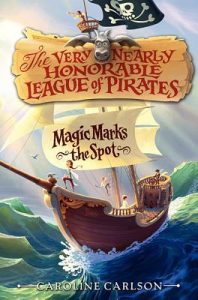 Hilary Westfield has always dreamed of being a pirate. But the Very Nearly Honorable League of Pirates rejects Hilary’s application because she’s a girl, and her father ships her off to Miss Pimm’s Finishing School for Delicate Ladies instead…

Generally my impression has been that if a MG novel doesn’t work for me, it’s usually the impulsivity of the main character, which grades into stupidity, and that is just so unappealing. There’s a certain slant in that direction here, but not too much, so that wasn’t actually an issue for me in this one. A secondary character was inexplicably stupid, which didn’t help, but I think this time it was the *very* light tone, which meant that some aspects of Hilary’s character and some aspects of the worldbuilding and also some elements of the plot did not ring true to me.

Hilary is an appealing protagonist. She’s impulsive, but not ridiculously so. She’s pretty competent in general. The gargoyle is a cute sidekick. Hilary’s governess is a very neat character, one of my favorites. Hilary’s friend Claire is quite charming; I liked her a lot. I liked the finishing school and how important it turned out to be. I sort of liked Jasper, the pirate who takes Hilary on as a crew member to help him find the important treasure everyone’s after.

Things that did not work so terribly well for me:

a) Character issue: Hilary certainly accepted her father’s villainy with surprising aplomb. I know they weren’t close, but there is essentially no emotional fallout from this discovery.

b) Plot issue: The way Jasper sets up his plan makes no sense at all. I mean, did he actually expect Hilary to apply for that position on his crew? He can’t have, and yet what he planned to do without her is completely baffling.

c) Second plot issue: I loved the idea of Miss Pimm, but whoa, that woman has apparently spent her entire career being dumb as a box of rocks, and she sure shows that quality in this story. I know one way to get the child protagonist to shine is to make the surrounding adults unbelievably stupid, but that is not something that works well for me personally. Also, having long ago committed to a really stupid idea, Miss Pimm’s mind is amazingly easy to change at the end.

d) Worldbuilding issue: The crew of Jasper’s ship consists of him, one boy, Hilary, the governess, and that’s it. Who exactly is actually, you know, sailing the ship? Certainly none of them ever seem to do any activity remotely involved with sailing. I actually had real trouble with this. Carlson might as well have called the “ships” flying carpets. Then Jasper could have given his ship magic commands to go here or there with no need for fiddling around with sails and stuff. In fact, if Carlson had done exactly that, it would have worked much better for me. Except no matter what, this issue feeds into the problem with plotting. What in the world did Jasper need to hire another crewman for, if no one ever does any work aboard the ship?

e) Second worldbuilding issue: Not to make too big a thing out of this, but you know, in the real world, pirates exactly exist. They are horrible people. Hilary has this big reaction to her father sinking pirate ships, but any navy that sinks pirate is doing its job. Any pirates that drown, fine. Any pirates that survive are just going to be hanged anyway. And so this worldbuilding element, where the pirates are (sort of) good guys and a title like The Terror of the Soundlands is, apparently, meaningless, really raises questions. Do pirates here never actually kill anybody or pillage anything? They’re actually just treasure hunters with peg legs and parrots and a tendency to say Aaargh, matey? Then why is pirating, ie treasure hunting, against the law so that naval ships sink pirates? It kind of doesn’t make sense and, since this is a central plot element, it kind of sat there at the edge of my mind the whole way through the book.

Soooo . . . I kind of liked the story, which does have a good deal of charm. Also some fun plot twists here and there. The friendships between Hilary and Claire, and between Hilary and her governess, worked well for me. I enjoyed the correspondence between the pirates and Hilary, and the excerpts from the book of pirating lore. I can see why this book’s got a ton of positive reviews.

But the story’s extremely light tone also seemed to step back from emotional depth where depth would have been due, and treating the pirates as both bloodthirsty on the one hand and harmless scallywags on the other, created an ongoing feeling that the world didn’t make sense.

Overall rating: I don’t know, for me, maybe a three. If I had a paper copy I would now give it to a kid twelve or younger. I expect it would work better for lots of kids in that age range than it did for me.