This post at DIAL H FOR HOUSTON caught my eye:

If you didn’t figure it out from the title, or the cover, Lieutenant Colonel is Military Sci-Fi (Mil-SF for short), a genre devoted to chronicling how and why people are gonna shoot at each other in the future. And, also unsurprisingly, Lieutenant Colonel is the fifth book in Shelley’s “DMC” series, with each earlier book having sequential titles like Lieutenant, then Major, then Captain, and so on. Not exactly creative, but what can you do.

In any case, this series centers around a dude named Lon Nolan as he works his way up through the ranks in the Dirigent Mercenary Corps (from which we get the “DMC” acronym). Lon is your typical officer– professional, honorable, and … kind of boring. Dude makes Honor Harrington seem like Hamlet. Wait, no, that’s not a good analogy, ’cause Harrington gets shit done. But I digress. 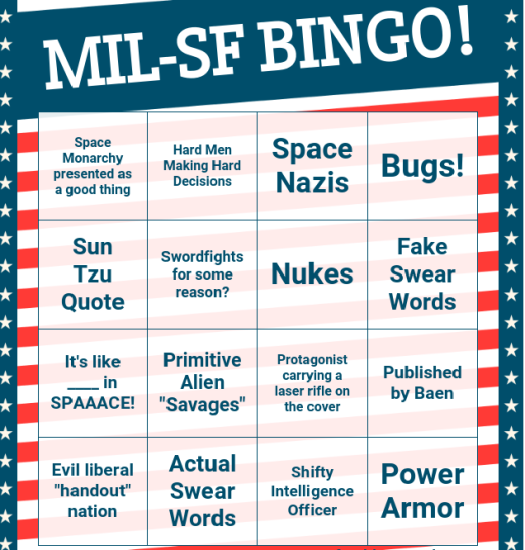 Let me see, one of my favorite Military SF series is Tonya Huff’s Valor series. Okay: Fake swear words, check. Primitive alien savages, yep, check that box in the first book. Bugs, probably some of the Other species are like bugs. Power armor, check. I would be surprised if there’s never a Sun Tsu quote, but I don’t remember any in particular. On the other hand, the cover features someone with a gun, but it’s not a laser rifle — shoots bullets of some kind, I believe. And the series isn’t published by Baen — it’s DAW (I just checked). No monarchy, whether presented as a good thing or otherwise . . . nope, don’t think you can win at Bingo with this one. I can think of some that come much closer — I wonder if this Bingo board was put together with an eye toward Falkenberg’s Legion?

There are a few boxes missing, though:

At some point we see a reprise of The Battle of Rorke’s Drift. I’ve seen that in at least three novels, probably more. At this point I can recognized Rorke’s Drift a mile away.

At some point someone says something like, “We’ll make a solitude and call it peace.” It’s a good quote. Very effective. I’m sure I’d use it myself if I were writing a MilSF story.

I’m sure there are others, too, but those are the ones that spring to mind.

7 thoughts on “Since I’ve been reading Military SF lately —”