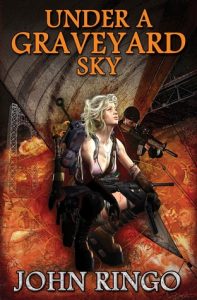 So, this quadrilogy was an unexpected pleasure – unexpected because I only picked up the first book as part of the Military SF bundle and I’ve already looked at and deleted about half of the books in that bundle. But I enjoyed Ringo’s book quite a bit and, as you see, went on with the series promptly.

And the series is complete with those four books.

I started the first one when we lost power during a recent thunderstorm – your phone produces its own light, see, so you can easily read on it when the lights are out. It started just a tinch slowly, but picked up fast. It’s a zombie apocalypse novel, as you may know. Here’s how it starts:

“Bloody hell.” And it really hadn’t started out as a bad day. Weather was crappy, but at least it was Friday.

Steven John “Professor” Smith was six foot one, with sandy blond hair and a thin, wiry frame. Most people who hadn’t seen him in combat, and very few living had, considered him almost intensely laid back. Which in general was the case. It came with the background. Once you’d been dropped in the dunny, few things not of equal difficulty were worth getting upset about. Until, possibly, now.

Now, this is not too promising imo. I am not just wild about this kind of direct physical description of the protagonist. I just tend to prefer a closer third person pov rather than this kind of omniscient narrator third person type of pov. That’s probably just me. I would also say that several of the sentences here are clunky and awkward, and I don’t think that’s just me. This sentence:

Most people who hadn’t seen him in combat, and very few living had, considered him almost intensely laid back.

is so awkward it’s actually hard to understand if you read it fast.

There are other instances of clunky writing all through this series, as you’d probably expect based on this beginning. The story has several other problems. Like, long expository passages, sometimes very textbooky, that are inserted basically as voiceovers from the narrator. That didn’t bother me, but when instead inserted into dialogue, these passages don’t necessarily fit the voice of the character who is supposedly speaking or thinking. In one spot in the last book of the series, the author completely breaks the fourth wall, which is especially jarring since that’s the only place it happens. Plus the author’s political views become a little bit over-preachy every now and then, especially toward the end.

Also, what is it with some male authors who seem to really get into writing super-duper ultimate kickass teenage girl characters? I’m thinking of Joss Whedon here, but at least there’s a supernatural explanation for Buffy. Summer is less believable to me, but there you have futuristic SF science. Ringo doesn’t have anything but the whim to create a thirteen-year-old female super-soldier and drop her into a zombie apocalypse, where she smashes her way through all the zombies in the entire world. A girl who is Thirteen! Years! Old! He does mention briefly that Faith has muscle density “almost like a male.” Suuuure she does. Faith is just not a believable character. At all. I will add that a couple of the male characters – well, one – was almost as unbelievable as Faith, so there’s that.

And yet . . . and yet . . . this series was so much fun! I whipped through it super-fast and enjoyed almost every moment. In fact, I totally experienced a book hangover after finishing it, and found myself so unable to read anything else that I gave up on anything new and went back and re-read LMB’s Sharing Knife series instead.

What this series has going for it:

1. Faith isn’t great with words, which makes her more sympathetic than total perfection would allow. Also, her character development is actually pretty good over the course of the series. “Trixie” is a nice touch – both incarnations – but Faith really does have more depth than is apparent at first. Also, it *is* fun watching her smash her way through all the zombies in the entire world, even though it takes a dedicated suspension of disbelief to accept this plot element.

Also, thankfully, Faith is not involved in any romantic subplot. Whew.

There is practically no romance anywhere in this series, incidentally, and not a whoooole lot of character development in general. Even Faith’s sister Sophia is not as well developed or interesting as Faith herself, imo. But I’m going to go out on a limb here and suggest that character was probably not Ringo’s first priority when writing this story.

2. The clunkiness of the writing almost completely disappears in the forward sweep of the story. For me. YMMV, but the fast pace and ratcheting tension and all those good things made these books just about unputdownable. So, yeah, this is definitely a plot-driven story, and a really fun read on that basis.

3. The worldbuilding and technological details are just great. Ringo obviously put a lot of thought into his zombie apocalypse and its aftermath. I loved it! I didn’t really believe in the complete downfall of civilization and the survival of only about 1% of normal people, but given that scenario, Ringo did a fantastic job working it all out and bringing civilization back from the brink.

I’m going to say that readers who really got into Kristoff and Kaufman’s Illuminae / Gemina / Obsidio series might very well enjoy Ringo’s zombie apocalypse. In a lot of ways I’d say the reading experience is similar. The Illuminae series is particularly noteworthy for its crazy-creative use of fonts and text effects, but considered as a story, it is also fast-paced and plot driven, with unbelievably competent teenage protagonists and minimal character development. The writing in the Illuminae series is probably better although it’s hard to compare directly because the structure is unique. There is definitely a lot less exposition in the Illuminae series, but I strongly suspect that readers who enjoyed the fast-paced story will also get into Ringo’s Dark Tide series. Obviously Ringo’s books are not YA, but that distinction doesn’t impress me much since when I was a teen there was no such thing as a YA section in most libraries and bookstores. There’s lots of blood and gore in Dark Tide, but I’ve never noticed younger readers shying away from blood and gore. Besides, there’s far less deliberate torture and so on than you get in The Hunger Games and spinoffs.

For a more impatient reader, I will say, if you try Graveyard Sky, be sure and get past the initial build and wait for the lights go out in New York. That’s the point at which the story really takes off.

I think my dad would really enjoy this series too, so I guess my next step is to pick up paper copies for him.