So you know what I have been doing recently? I have been shelving the physical books I’ve read lately. What a lot of trouble compared to piling them on the floor! I’ve been shifting the contents of those shelves around as necessary to get everything to fit. This is a big and somewhat annoying job, as you might imagine considering I do it only every year or two. Or three. Things I hate: having to decide which books to get rid of. Things I enjoy: taking a close look at my shelves and remembering what’s on them.

The book is Bones of Faerie by Janni Lee Simner. It came out in 2009, which I think is when I read it. 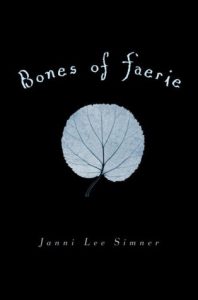 Here is the first line I remembered:

“When I was seven, my father set my baby sister out on the hillside to die.”

That’s not really creepy as such, but it certainly is striking. Here is the real first line:

As a first line qua first line, that is not very striking and certainly not creepy. You can lose a sister in all kinds of ways, after all. But here’s the whole first page, to set that line in context:

I had a sister once. She was a beautiful baby, eyes silver as moonlight off the river at night. From the hour of her birth she was long-limbed and graceful, faerie-pale hair clear as glass from Before, so pale you could almost see through to the soft skin beneath.

My father was a sensible man. He set her out on the hillside that very night, though my mother wept and even old Jayce argued against it. “If the faerie folk want her, let them take her,” Father said. “If not, the fault’s theirs for not claiming one of their own.” He left my sister, and he never looked back.

I did. I crept out before dawn to see whether the faeries had really come. They hadn’t, but some wild creature had. One glance was all I could take. I turned and ran for home, telling no one where I’d been.

Now, that’s striking. And fairly awful. It certainly sets the tone for the book right away. Dark fantasy, maybe grading into fantasy dystopia – this is probably a fallen world given the mention of “Before.” And so it is – you’ll see how it all works out if you read it. The ending is hopeful, you’ll find, anticipating a brighter world to come, as tends to be the case in YA dystopia.

So that’s the one I was trying and trying to think of. Glad I found it.

According to Goodreads, there are two other books in the series. Maybe now I’ll pick those up.