I picked up Freedom’s Gate by Kritzer after reading some short piece of hers that was up for a Hugo a year or so ago — was that just last year? — so we see that every now and then it does make a difference to an author to have something of theirs nominated.

Then it took a little while for me to try the book because I knew it was the first book of a trilogy and I needed to have time for that; also it’s harder to whittle down the TBR pile if you read one book and buy two more. Sigh.

But! This is a really good trilogy, so I’m glad I tackled it. Naomi Kritzer is firmly on my radar now, that’s for sure. 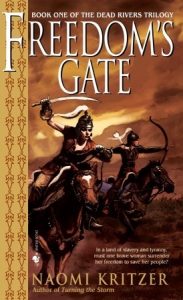 Here’s more or less what Goodreads says about it:

Twenty-year-old Lauria is the favorite aide to Kyros, a powerful military officer. On his authority, she is messenger, observer, and spy. But now she is entrusted with a mission more dangerous than any that have come before Freedom’s Gate. . . . After years of relative peace, word has come to Kyros that the bandit tribe known as the Alashi is planning an offensive. It is up to Lauria to infiltrate the Alashi by posing as an escaped slave . . . [while] her own views are gradually changing, calling everything she believes about her world into question.

I don’t know, I probably wouldn’t have picked this one up for either the cover or the general description. But I’m glad I tried it because it’s right up there as one of my favorites for the year so far.

Reasons You Should Try This Trilogy:

1) Well-drawn complicated characters. Lauria is the main protagonist; she’s a free woman who serves the Greek Kyros, who is a member of the ruling class. Then she infiltrates the Alashi as a spy. Then she genuinely switches sides. Then she gets caught up in various personal concerns and political complications and winds up striving to change the world. During the course of all this, she changes and grows a good bit, quickly becoming a much better person while never becoming unbelievably nice.

Tamar is a slave who escapes to the Alashi with Lauria; she becomes a more and more important character as the story unwinds and takes an important pov role in the third book. The relationship between Lauria and Tamar changes and develops, with Tamar starting off in a more sidekick kind of role but then becoming Lauria’s equal. I think Kritzer made Tamar a pov protagonist because she had no choice; the story had started to sprawl and she needed to show more of it than just Lauria’s part. But it worked fine to bring Tamar into a pov role.

2) No romance! Or almost none. For a bit, just briefly, it looked like Lauria and Tamar might shift from a sworn-sister relationship to a more romantic relationship. This didn’t happen, and I’m glad. Modern American society is so sexualized that sometimes it seems impossible to find a novel where friendship doesn’t turn sexy. There are all kinds of romantic relationships in this trilogy, but all of the romance stays thoroughly in the background and there is no implication that sexual and romantic relationships are the only truly important relationships.

3) Worldbuilding and Mythology. My goodness, what a wonderful take on Greek mythology. Alexander lived a long, long time and eventually became a god, casting down Zeus, whom he imprisoned under a mountain. Prometheus and Arachne are important mythological figures as well. It’s not clear how much of this mythology is literally true, but it’s great background. The dominant Greeks, the subjugated people they conquered, the djinni enslaved by the Weavers, the imprisoned rivers . . . it all makes for a wonderful backdrop for this story, not to mention furnishing the overarching quest.

4) Nuanced ethics. Is it right to demand that slaves seize their own freedom before welcoming them, as the Alashi do? What about freeing slaves who don’t want to be free? How do you define freedom anyway? What about killing a lot of people in order to free slaves, is that okay? Is it all right to use an enslaved djinn for a good cause? What if you decide it’s not; do you have to try to stop everyone else from using enslaved djinni too – even for a good cause?

Lots of complicated ethical situations and choices add depth to this trilogy. Plus, it’s all worked in smoothly enough that nothing ever seems preachy.

5) Presentation of bipolar syndrome. The Weavers – sorcereresses who gain power by enslaving djinni – almost inevitably suffer from bipolar syndrome, which gets worse the more djinni they bind. It’s not explained why; this is one bit of the worldbuilding that you just have to accept because there’s no particular reason for it. But the presentation seems to ring true to me. For part of the trilogy, after attempting to bind a djinn, Lauria herself suffers from alternating melancholia and “cold fever” – the one with a slowing and sluggishness of will and thought, the other with a grandiose conviction that she is the chosen one who cannot fail in her quest to free the rivers and change the world. Which incidentally adds a nice twist on the Chosen One trope to the story.

6) Quality of the writing: Top notch. Not ornate or flowery or lyrical, but smooth and unnoticeable. Pacing is good, neither too much nor too little description for my taste. Relationships are important and complex but not angst-ridden or despairing.

Things That Didn’t Work Quite So Well:

Um . . . not much is coming to mind here. The plotting is complicated, as you might expect in a single story that has room to stretch out in a trilogy. But every aspect of the plot comes together well in the end, despite several surprising twists that I didn’t see coming. I mean, I didn’t scream in shock as can happen with Andrea K Höst or Elizabeth Wein, but I certainly was startled into laughing out loud several times, in sheer surprise. If Kritzer had been less deft, I might have found some of those twists unbelievable. However, she made everything work. Every single twist fit neatly and believably into the story.

Definitely a keeper, this is a series I’ll enjoy re-reading in a couple of years. Despite the overflowing TBR pile, I’ll certainly be picking up more of Kritzer’s books in the near future.

This trilogy reminds me pretty strongly of Sherwood Smith’s Inda series. Of course the worldbuilding is very different, but if you liked that, I bet you’ll enjoy this.