Okay, now I’ve read four books by Miéville: The City and the City, Embassytown, Un Lun Dun (which I did not finish) and now Railsea.. I have two more of his most recent titles on my current physical TBR shelves, too. For me Miéville is not the sort of author where I read through his whole backlist in a month. His books work better for me spaced waaaay out. But after Railsea, I believe I’m more likely to actually open one of the others before too very long.

Okay, let me see. The City and the City is a police procedural, sort of, with (as I’m sure you all know) a weird setting. Just how weird is kind of open to interpretation. I liked it a lot, partly because I like police procedurals and partly because I liked the strange setting and mostly because I found the protagonist compelling. Embassytown was interesting in concept and intellectually engaging, without being (for me) especially emotionally engaging. Also, I don’t think I ever quiiiite believed in the essential premise of Embassytown. For whatever reason, Un Lun Dun did not work for me and I wound up reading about half of it, skimming the ending, and giving it away.

How does Railsea fit in to this set? 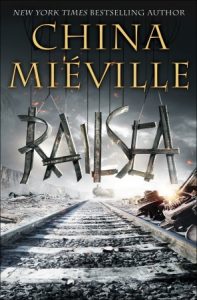 Right at the top, it turns out.

Railsea is essentially a YA novel. I don’t know if it was marketed that way. It was published in 2012, recently enough that perhaps it falls into the (continuing) era where, without an angst-infused central romance, a book may be called Adult and marketed as Adult no matter how thoroughly it otherwise fits the YA category. However it was presented, Railsea is definitely YA.

At first I wasn’t at all sure I was going to like this book. I didn’t like the protagonist, Sham ap Soorap, who may be, at the beginning, the least introspective and least aware of his own feelings and even his own thoughts of any protagonist ever. With the possible exception of Breq in the Anxillary Justice trilogy, except unlike Breq, Sham is also globally maladroit. Also, the world is not merely peculiar, it is biologically implausible. I wasn’t sure I was going to enjoy the book enough to bother willingly suspending disbelief about the subterranean ecosystem.

Then, about fifty pages in, Sham finds the camera card and everything takes off. He quickly grows into a more likeable protagonist, the situation gets more compelling, the supporting characters get more interesting (especially the captain), and all of that continues to snowball right up to the end. When I was fifty pages in, I wasn’t sure I’d finish the book. When I was a hundred pages in, I thought probably I’d finish it and then give the book away. But by the end, I’d changed my mind. This one gets shelf space, because I definitely see myself coming back to it and re-reading it one of these days.

You probably know that Railsea is supposed to be an homage to or a retelling of Moby Dick. How true is that? Well, without going back to re-read Melville’s classic, I’d say it’s pretty close. But first, Sham is off on his own a lot of the book, so the focus is pulled off the giant pale-colored mole and Captain Naphi’s obsession with it. Second, China Miéville re-interprets and uses the captain’s obsession in some really unexpected ways. Captain Naphi may be my favorite character. She is certainly likely to surprise the reader more than anyone else. The plotting was interesting, and tighter than I at first thought it was going to be, integrating the obsessive hunt for the giant mole with an entirely different plot that ultimately took the story in a completely different direction.

Stuff that didn’t work quite as well for me:

The moderately horrifying prologue probably made me delay reading this one for an extra couple of years. I’m not totally sure that prologue is doing the book any favors.

Periodically, including in the prologue, Miéville takes a moment to address the reader directly. Mostly I found the coy tone of these intermission-style chapters a bit unappealing, and I’m not sure addressing the reader felt natural or necessary. If you’ve read this book, what did you think?

The Loyal Animal Companion so typical in YA appears here in the form of a little bat. That trope is a tough sell for me and I have to admit I didn’t find it just super-plausible here, though I grant, taking out the bat would have produced some awkwardness with various plot points.

Aside from Captain Naphi, and to a (limited) extent the Shroake siblings, none of the supporting characters seemed very well developed. In particular, I’m not quite sure I bought everybody’s fondness for Sham. This may have been because I was anything but fond of him myself for the first quarter of the book.

And no, actually, I never, ever got comfortable with replacing all the “ands” with &s. Four hundred pages did not suffice to make that look okay to my eye.

However, all that aside, the wacky peculiarity of the worldbuilding, the way Sham developed as a character, the cleverness of the plot, and the delightful, satisfying resolution were more than enough to make this book a keeper, and to bump every other book of Miéville’s up a bit higher on the TBR pile.