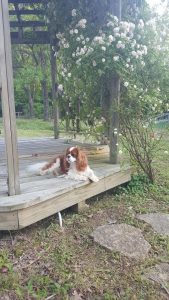 Of course for me there’s no point in taking pictures of just the roses! I have to go get one dog after another, brush their ears, set them up, and then take lots of pictures. I had time for six dogs before it started raining, so hey, Friday is a good day for a post that’s all photos, right?

If you click on a picture, it’ll blow up, by the way.

I will add that this rose is a climbing polyantha, ‘Cameo,’ which was not sold to me as a climber. As you see, it totally is. The small creamy-pink flowers are nicely scented. If you, like me, have lost roses to rose rosette disease, I can tell you that ‘Cameo’ seems immune. So does another polyantha, ‘Marie Pavie,’ which is a small rounded bush that does suffer some tip dieback every year. But Marie is basically thornless, so trimming off the dead tips is not a huge chore. That is another rose that is beautifully scented as well.

Anyway, onward! Which dog is the most beautiful? is an impossible question to answer, but I can tell you which is the most photogenic. That is Ish, who will lie or sit in any pose you put him in and tilt his head charmingly if you make noises like a duck at him. That’s him at the top of this post and here he is again: 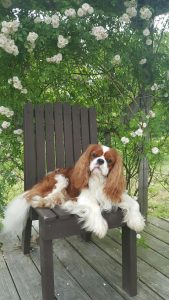 He practically can’t take a bad picture. I got lots of beautiful shots, many of which would make excellent calendar pictures if I get around to making my own calendar for next year. 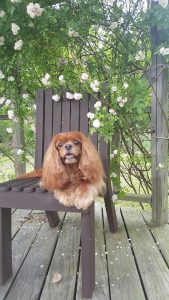 It was impossible to get Dora to look in any direction but straight at me. But she too will take most positions and hold them, and if you bark like a dog at her, she will pretty well stop panting and hold still. 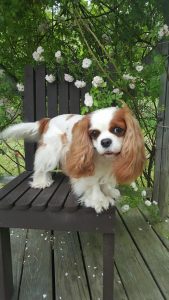 Kenya really, really prefers to stand. She was pretty easy to show when she was four years old and finally finished her championship, because by that point she would Stand Like A Rock and Wag Her Tail. (She got lots and lots of treats for standing still.) On the other hand, if you want her to sit, well, not so much. She really takes the best pictures on the ground, free stacked. 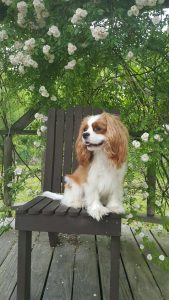 Kenya’s daughter Honey looks like she is in on a hilarious joke here, doesn’t she? I think it’s hard to get a really good picture of her, but this one is cute. 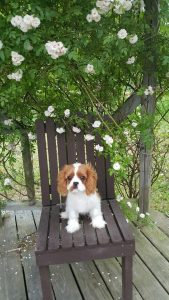 Conner barely got to try; it started raining juuuust about the time I brought him out to the gazebo. 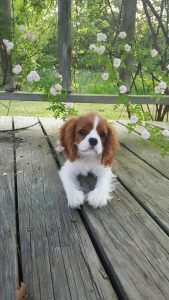 And finally, here is little Kimmie, who got the most “likes” by far when I posted some of these pictures on Facebook last night. She was quite difficult — both Conner and Kimmie do not quite have the concept of “stay” down just yet, so lots of blurry pictures and pictures of puppies jumping off chairs and so on. Plus I do not really trust them off leash. Of course I had excellent liver brownies with me so I could call them back when they started to go off to investigate some other part of the landscape.

Sorry, no pictures of Pippa! Now that she is deaf, it is practically impossible to get her to look in a particular direction or stop panting. I got some wonderful pictures of her with a different rose on this same gazebo when she was much younger. That was ‘Renee,’ a beautiful pink climber, but unfortunately that one was not immune to rose rosette.

Also no pictures of Chloe or Jos! The rain stopped me from getting them in this set of pictures. Hopefully the rain didn’t ruin the roses, so maybe this weekend.