Here’s an interesting post that I gather was pulled together from a reddit thread: These Books Were Once Considered “Classics” But Are Now Largely Forgotten

Telemachus by Francois de Fenelon — evidently a retelling of Ulysses from Telemachus’ point of view. That is an interesting idea, but I don’t know that I would rush right out.

Of Human Bondage by W. Somerset Maugham. That one I’ve heard of. Doesn’t sound like my kind of thing at all. “follows orphan Philip on a bildungsroman through Europe.” — yeah, no, not a very appealing description.

The Magnificent Ambersons by Booth Tarkington, “follows the decline of the superrich Ambersons in the wake of the Industrial Revolution.” Ugh.

Scaramouche by Rafael Sabatini. Now, that one I actually have on my TBR pile. I will have to overcome my ingrained distrust of anything labeled a “classic” in order to read it, and so far that hasn’t happened. The first line is almost as famous as “It is a truth universally acknowledged” or “Call me Ishmael.” Probably you know it, right? “He was born with a gift of laughter and a sense that the world was mad.”

The Moonstone by Wilkie Collins. I faintly remember having heard of this one, which actually sounds quite inviting. “One would think, in creating what is believed to be the first modern English detective novel, you would solidify your place among the literary greats; that seemingly is not the case for Wilkie Collins, whose 1868 epistolary novel The Moonstone pioneered a new genre.” I like English detective novels and I like epistolary novels, so I guess I should look into getting this one. … Yes, it seems to be free for Kindle. Okay then, added to the TBR pile.

Star Maker by Olaf Stapledon. Well, well. That one I’ve not only heard of, I think I read it. A while ago, though. I don’t remember it well, but yeah. I don’t really like the “blending into the cosmic mind” type of outcome.

Rope by Patrick Hamilton. Well, that is certainly a forgettable title that probably did not do the book any favors. Looks like it was a play, and it is described thus: “[a] Dickensian” portrayal of British street culture amid the World Wars.” Hmm. I think I would rather just read something by Dickens.

Okay, that’s it on the list. Anything you would like to add? I’ll include one that may never have been a classic, but should have been: An Episode of Sparrows by Rumer Godden, published in 1956. 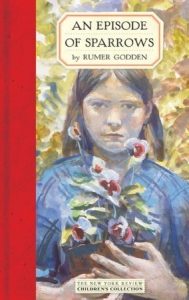 Practically any of Godden’s work ought to have been a classic, and should still be read today. My personal favorite is actually In This House of Brede.

6 thoughts on “Ex-classics: when classics are forgotten”