Have you seen the new award for World Fantasy? 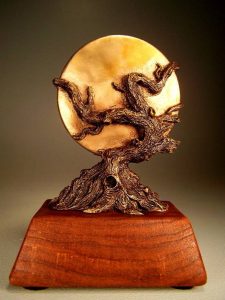 I pretty much like it, though I regret that there is no dragon. I’m glad whoever was involved in choosing the design steered clear of representations of any writers, living or dead. Using a person’s head would have pretty obviously been a terrible idea, no matter who was chosen. A tree with a full moon — even with no dragon! — should be far less controversial.

The “note on the design” at the WF site adds:

But not all trees are nurturing: it’s the treatment of a Chora sapling which begins a bloody war in Jordan’s books. Tolkien’s Mirkwood is as evil as its denizens and Weasels and Stoats rampage around Kenneth Grahame’s Wild Wood; J.K. Rowling’s Whomping Willow has terrified millions, while Patrick Rothfuss’ Cthaeh, lurk unseen in the branches of a giant tree in the fae realm. There’s the baobab tree in Antoine de Saint-Exupéry’s The Little Prince, Ray Bradbury’s The October Tree, the apple tree in The Wizard of Oz, and many more.

Vincent Villafranca has encapsulated the worlds of fantasy in the branches of our new award, and we thank him.

This is all well and good, but I still would like a dragon.