Here’s a great post over at The Book Smugglers: ROSHANI CHOKSHI ON THE INSPIRATION TO FINISH A NOVEL

I saw the title and instantly thought: what a great idea for a post. Yes yes yes, starting a novel is easy. I did that yesterday and after the initial ten seconds of gazing at the completely blank screen, it was fun. Beginnings are always fun! I started this one in first person, only the second time I’ve ever tried that, and so far I’m liking the feel of it. We’ll see how it goes.

Anyway, how about when you’ve gotten stuck, or busy with other things, and leave a fragment of a novel sitting in a drawer for a year or two or ten … how and when and why can you be prodded into taking it out and finishing it?

That’s what I figured this post would be about. And I was right, or partly right. Chokshi is mostly talking about finishing a book when you have a deadline and no real inclination to write. That’s another important topic, to be sure.

To start a story feels innocent. It’s lovely and new. It’s a lace of snowflakes on flowers. Swift and delicate. It fills you with urgency to bottle up this feeling and get thee to a laptop/notebook/writing apparatus of choice because Ah, Fate, there is a story within you!

This post is about the inspiration to finish something.

Chokshi does offer the all-important caveat that this post is personal; ie, different writers are going to experience writing differently. That’s important. Here is her take on the experience of getting stuck and then unstuck:

I used to dream of writing for a living, only to find that somewhere along the way I lost wanting to live for writing.

I found that once more. But it was painful. I had to pluck every voice from my head. I had to write for the sake of the story and not for anything else.

That was my rallying cry, and it became the soul of A Crown of Wishes. At its core, A Crown of Wishes is a story about the power of stories. In writing it, I found joy and, honestly, peace. That the story itself was inspiration and reason enough to finish.

A nice conclusion to the post, and nice when it happens. I’ve also just bulled through and finished manuscripts on nothing but determination to meet each day’s minimum wordcount. It’s certainly more fun when it’s not such a slog.

Let’s see, let’s see … okay, I see Roshani Chokshi wrote A Star-Touched Queen, which came out about a year ago, so in the post she’s talking about the sequel. Let’s check out the first book: 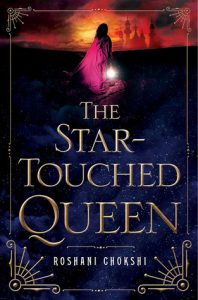 Maya is cursed. With a horoscope that promises a marriage of death and destruction, she has earned only the scorn and fear of her father’s kingdom. Content to follow more scholarly pursuits, her whole world is torn apart when her father, the Raja, arranges a wedding of political convenience to quell outside rebellions. Soon Maya becomes the queen of Akaran and wife of Amar. Neither roles are what she expected: As Akaran’s queen, she finds her voice and power. As Amar’s wife, she finds something else entirely: Compassion. Protection. Desire…

But Akaran has its own secrets—thousands of locked doors, gardens of glass, and a tree that bears memories instead of fruit. Soon, Maya suspects her life is in danger. Yet who, besides her husband, can she trust? With the fate of the human and Otherworldly realms hanging in the balance, Maya must unravel an ancient mystery that spans reincarnated lives to save those she loves the most…including herself.

Sounds intriguing so far! Reviews are mentioning . . . let’s see . . . sounds like some reviewers wish the book had stuck more closely to Indian mythology, so it’s probably an Indian-flavored secondary world fantasy. Or even a Greek-and-Indian flavored sort of story, I’m seeing references to Persephone.

Some readers are finding the prose elegant and lush, others purple. Some love the romance and some find it too insta-romancy . . . the usual wide range of opinions. I’m just glancing through reviews, you understand, not really reading them. I don’t want a ton of spoilers, just a notion whether this book might be my thing.

After which I may not have time to read it just yet since I should probably finish writing some book or other . . . lots of started manuscripts around here!

2 thoughts on “Inspiration to finish”