Okay, so, second books are always a bit fraught, right? You liked an author’s first book, maybe you liked it a lot, and here’s the loosely connected sequel and you’re hopeful you’ll like it as well, but who knows? 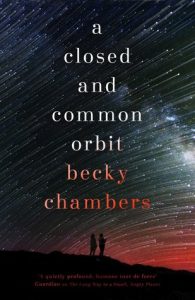 Of course you all know I really enjoyed Becky Chamber’s debut, The Long Way to a Small, Angry Planet. A rather cheerfully Star Trek-y feel, interesting characters, fairly smooth plotting with interesting and appealing subplots … a rather cumbersome title, but whatever.

I’m not sure I liked the sequel better, but I liked it a lot.

A Closed and Common Orbit has a much tighter focus than the first book. There are just two pov characters: the new incarnation of Lovelace, now incorporated in a humanlike body and called Sidra; and Pepper, the woman who has taken Sidra under her wing. Well, except that a large part of the story is told in flashbacks of the young Pepper, at the time called Jane.

Also, the journey was important in the first book; the reader sees a swath of the universe. In the second, the characters stay put, so the local setting is more developed.

The more scattered focus of the first book was okay, but I did like this more limited structure. Both Sidra and Pepper/Jane are good protagonists. It’s easy to sympathize with Sidra, who is having trouble adjusting to being limited to a humanlike body when she used to inhabit a ship. She’s also having trouble figuring out how to relate to organic people. And she hates being dependent on Pepper. All this is totally understandable. Her journey of self-formation and self-discovery is easy to relate to. Also, the thing with the senses is pretty cool

Pepper and her significant other, Blue, hold up their part of the plot as well. Because of the flashbacks, the reader really gets a chance to understand where Pepper is coming from, why she would be so determined to help and protect Sidra, all of that.

The incorporation of the flashbacks was not the problem. While reading, it’s easy to keep track of where and when you are. However, the pov of young Pepper/Jane is extremely compelling; so much so that some readers (judging from my own experience) are going to feel a slight wrench whenever her pov switches back to Sidra’s. Nothing against Sidra, but yeah, Jane is going to steal the show.

This kind of thing is probably inevitable whenever you have multiple pov characters.

What worked a little less well:

I guess large-scale slavery and murder must be legal in this universe? I guess there’s some kind of noninterference clause in some legal system where if a particular planet wants to indulge in that kind of thing, everyone else will politely look away? Because I kind of expected that at some point someone would bring down a hammer against Jane’s home world. However, there was never even the faintest suggestion that anything like that might happen. That’s too bad. Having horrible worlds like that embedded in a basically cheerful and tolerant universe is … well, it’s too bad.

This was a strong sequel and a story that broke a string of DNF books for me. I’ll be very interested in whatever Becky Chambers writes next.