A quote from Stern’s Introductory Plant Biology, from which I am making study guides for a student.

“A number of years ago, an Australian farmer, while plowing a field, glanced back and was startled to see what looked like flowers being tossed to the surface of the furrows. He climbed off his tractor to take a closer look and found that what he saw were, indeed, flowers. Furthermore, the plants to which the flowers were attached were pale and had no chlorophyll. He reported his find to a university, where botanists determined that the farmer had stumbled upon the first known underground flowering plant. The plant proved to be an orchid that lived on organic matter in the soil and was pollinated by tiny flies that gained access to the below-ground flowers via mud cracks that developed in the dry season.”

This plant is now called Rhizanthella gardneri. Here is a picture of a flower: 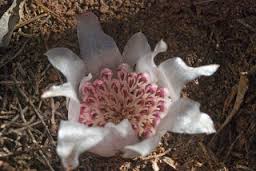 And here is what Wikipedia has to say:

Rhizanthella gardneri, also known as Western Underground Orchid, is a plant in the orchid family, discovered in the spring of 1928 in the wheatbelt of Western Australia.
Jack Trott had bent to investigate an odd crack that had appeared in his garden’s soil, and had noticed a sweet smell that arose from the ground. Scraping away the soil, he soon uncovered a tiny white flower, about half an inch across, growing underground. What he had found was an entirely new type of orchid. The discovery generated such excitement that a wax model was toured around the British Isles.

More from Wikipedia at the link. Apparently it is a parasite on a more normal plant called broom honeymyrtle.

This plant was discovered in 1928? I can’t believe I never heard of this before. Talk about living in a science fiction universe. If you put something like this in a story, who would be able to suspend disbelief far enough to accommodate it? Not me. Or not before today.

The world is always weirder than we know.