Today, general good news is going to be preempted by personal good news.

Forthwith, a story, in pictures: 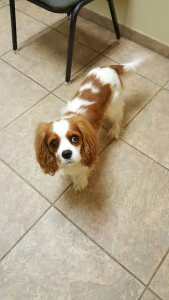 Here is Honey in early December, waiting for an ultrasound to determine whether she is pregnant. A month previously she had been bred to a really nice male, an AKC and CKCSC Champion owned by a friend of mine in St. Louis. You can take a look at him here if you like.

Because Honey had missed twice, I was not sanguine about the likelihood of her being pregnant this time either. Certainly at this early point she was showing no signs of pregnancy, such as morning sickness. But some girls don’t.

Turns out, at this point she was carrying four puppies. At this point in gestation, the babies are really undeveloped and do not look much at all like puppies. They are about the size of really large grapes. During the next five weeks, they will turn into fully developed puppies. It’s really remarkable to think about. 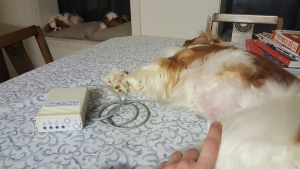 Here is Honey, patiently enduring yet another session of uterine monitoring. She is lying on a sensor that’s connected to this little boxy recorder. After an hour or so, you plug the recorder into a base unit and zap the ultrasound data off to some member of the Whelpwise staff, who calls you back and tells you what is going on, which is hopefully nothing. By the fifth week of pregnancy, though, Honey was already having contractions. Four weeks to go! Prepared, I had on hand 30 tablets of Terbutaline, 25 vials of injectable Terbutaline, injectable progesterone, and appropriate syringes and needles.

Also, if you need to buy drugs for your dog, I suggest you look at GoodRX website and see if you can get them more cheaply. The coupons I got there knocked the price of the Terbutaline back A LOT.

Now, Honey started with 1/2 tablet of Terbutaline. Basically every week she would start having contractions again and we would go up another quarter tablet. During the last nine days, we had to switch to the injectable. At that point she was getting a little Terbutaline injection three times a day, plus a much nastier intramuscular injection of progesterone every other day. 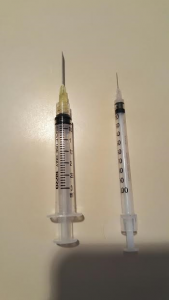 Quite a difference, isn’t it? The little one is a 29-gauge needle on an insulin syringe. Done right, Honey barely seemed to notice those injections. Progesterone, though! Of course all hormones are lipids, so they have to be given in an oil suspension, and that means the liquid is thick. I had to use those big 20-gauge needles for that. Honey was a real trooper about it, but I assure you she always got several liver brownies before the injection and several more afterward.

With this regime, she made it right to term. I scheduled the C-section a day or so before her presumptive due date. You do not want a girl who has had serious issues with premature labor to try to deliver normally; you can assume the placental attachments have been compromised by all those early contractions. So that’s why the C-section. It’s also just safer for the puppies, provided that your vet is competent, of course.

That last day, December 3rd, stretched out and out and was very tense. This is when Laura Florand kindly sent me an advance copy of her most recent book, A Crown of Bitter Orange, which was just what I needed to get me through the day. Meanwhile, Honey was uncomfortable and unsettled and we could not get her contractions all the way stopped, though they were not very strong contractions. I did monitoring sessions at two in the afternoon, seven in the evening, ten thirty at night, and a short session at two in the morning. She was the same all the way through all of that — continual weak contractions.

Honey actually went into labor at about six in the morning, just a few hours before the section was scheduled. This was actually ideal timing, as it means her hormones were cascading through the get-ready-to-be-a-mother sequence — especially helpful for a first-time mother. 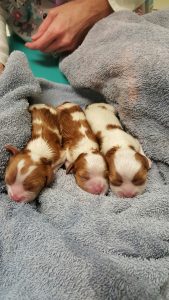 Three perfectly nice, healthy, vigorous puppies. There was no sign of a fourth, so probably Honey reabsorbed that one shortly after the ultrasound. But three! Three healthy puppies! So different from (a) one puppy, or worse (b) unthrifty puppies that die. Three is still below the average litter size for a Cavalier, but it is a normal litter size. At last, a real litter after four single-puppy litters in a row!

This is Girl One, Girl Two, and Boy, by the way.

I gave Honey chicken with her food, chicken broth to keep her hydrated, liver brownies, whatever she wanted, you bet. She had Tramadol to help with the pain — and it did seem to help, a lot. Two days later she was feeling pretty good and I had to be careful not to let her trot on leash. I will just add that during the very coldest days of the year, I was taking her out on leash! The next week it was 50 degrees warmer, but by then she could go out by herself.

Meanwhile, everyone else was probably feeling a little neglected: 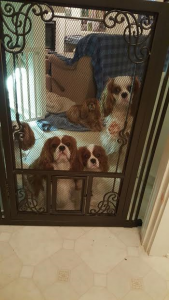 Poor guys! But just thirty hours after the section, Honey’s maternal instincts kicked in good and hard. That’s not bad for a first-time mother post-surgery. After that I could leave Honey alone with her babies — always staying in earshot, though — and hang out with the other dogs; also I could start getting some work done. That was useful, as I suddenly got back suggestions for one last (very minor) revision for my space opera, and then immediately for a last (also minor) revision for my second Saga fantasy.

For a week, Honey hardly left her babies ever. Chilling is the worst threat to newborn puppies, so it was good that she stayed with them and also good that they could pile up on each other. I never left them unsupervised, though, just in case. The babies went in a warming box away from Honey when I had to leave for a few minutes. This paranoia proved justified when Honey surged to her feet so vigorously on the fourth day that she actually sent Girl One flying right out of the whelping box! How long would it take a puppy to get seriously chilled lying on a tile floor in January? Ten minutes? Five minutes? Less? Didn’t matter because I swooshed her back into the whelping box in less than one second. Thus we see that there really is no substitute for the actual physical presence of a person with a new litter.

The puppies all lost a little weight at first — normal — then gained well. I boosted them for the first four days or so — tube feeding each puppy three or four ccs of formula every six hours or so. This would not be nearly enough for orphan puppies, but it got my babies moving on a nice upward curve. Girl Two tended to stall her weight gain, so she got two or three ccs a couple times a day for several more days. 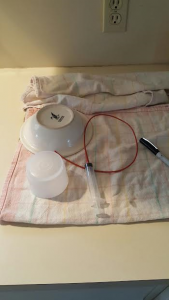 Terrifying the first time you do it, feeding a puppy by tube is actually quick, easy, and safe. You measure the tube against the puppy’s body, run it down the puppy’s throat into her stomach, and inject however much formula you think advisable. There’s no risk of the puppy choking, a weak puppy doesn’t need to nurse, and you needn’t fuss about trying to get the hole in a nipple the right size. Still, I was happy to put the tube away after eight or so days.

A “good puppy” ought to double its weight in seven to ten days. All of these doubled their weight in eight days. They started at 6 1/2, 7, and 8 oz, by the way. Girl Two was the smallest. After ten days, all of them were over a pound, the girls were running neck and neck, and the boy was less than three oz heavier than the girls.

Also, by this time they were starting to get cut!

Here they are at two weeks: 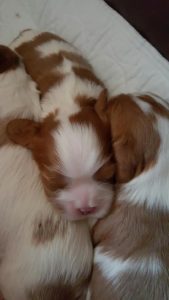 Girl One has the best face markings by far, though I like Girl Two’s body markings better. Face markings matter a lot in Cavaliers, so now it’s just a waiting game to see if Girl One has nice eyes, a pretty head, preferably no freckles, good tail set, good structure . . . all the stuff you need for a show dog. She’s the one I’d like to keep, for sure.

The color comes way down on the right side of Girl Two’s face, much farther than on the left side. That probably means she is destined for a pet home

Boy is very white, but perhaps not TOO white. He has a mustache mark down on the left side of his lip. But if Honey could breeze through her championship with a kiss mark on her face, well, if Boy looks really nice, I’ll keep him and see if he can follow in his mother’s footsteps.

Now, at just about three weeks, the puppies all have their eyes open. Boy just tipped over two pounds. Fat little dude. His sisters are not too far behind. I will try them on solid food (well, thoroughly soaked food) maybe this weekend, though generally I find Cavalier puppies are not too inclined to try real food this early.

One last shot: here is Girl 1 looking so cute with her little eyes open! 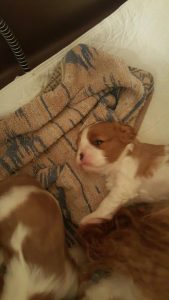 The puppies aren’t playing just yet, but all of them can wobble upright and you can see the precursors of play behavior starting to emerge in the minute or so between nursing and falling back to sleep. By this time next week, I expect they will be getting to the super-cute stage!