This one’s been on my radar for several months. First somebody at Archon (I think it was Archon) told me all about Illuminae and then it reappeared as a Cybils finalist (along with The Keeper of the Mist, let me add).

So I finally picked up my copy and opened it up and . . . wow, what an interesting (and fun, and fast-paced, and emotionally compelling) book-shaped item Illuminae is. 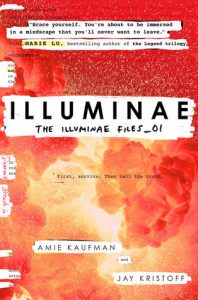 You can think of Illuminae as an epistolary novel, though that’s not exactly right. It contains reports, often written in a chatty style; lots of email exchanges; journal entries; and the most fascinating use of color and shape on the page. Some of this was a tiny bit too cute, in fact, as spokes or swirls of words look really neat but are quite difficult to read. Also: grey print on a dark grey background is a terrible, terrible idea. Luckily there wasn’t too much of either.

Lots of drawings of various kinds, too. Every now and then it’s like the book tries to be a graphic novel. This is definitely a visually exciting book.

The bad news: you really must get this in paper. I can’t imagine some of those pictures and weird pages showing up properly on a Kindle. If you have read this in ebook form, please weigh in. Also, not sure whether this would work as an audiobook – I mean, you’d lose the drawings and stuff, some of which are kind of important, but it might work other than that.

Well, I see that’s a lot about the physical presentation. How about the story? All right, here’s the basic idea: prior to the first report hitting the inbox, way out in the far reaches of human-settled space, a corporation called BaiTech annihilated a rival corporation’s mining company. Several thousand people got away on three ships and are now fleeing the more powerful BaiTech ships, after them because they need to finish the whole annihilation thing before word gets out that BaiTech has chosen to deal with its business rivals by committing wholesale atrocity.

Okay, so. This book does not end on a cliffhanger, but neither does it tie up every possible loose end. Far from it. But Book 2 (Gemina) is out now – winging on its way to my door as I type this. I believe the series is probably going to be a trilogy, so I would just as soon Book 2 ties off fairly neatly. We’ll see.

So, what does this book offer other than the unique visual presentation?

Kady has lost everything in this disaster, or at least she believes she has. Except her boyfriend, Ezra Mason, with whom she broke up just that morning. I’m sure it won’t surprise you to learn they get back together. The relationship builds between them as the story progresses, though they are seldom actually on the same ship at the same time. Hence all the email exchanges, in which the reader gets to know them.

Kady is a serious computer geek. She is prickly, stubborn, independent, and as you might imagine, really, really pissed off at BaiTech. She is the primary protagonist, though we see into her head only in little snippets of her journal. For me, Ezra did not seem quite as developed a character as Kady, though he held up his end of the plot pretty well.

The pacing, all the way through.

This is quite a page turner, and you turn the pages all the faster as there is hardly any description to slow you down. Just what can be worked into email and reports and journal entries and stuff like that. During email exchanges, there can be fewer than a hundred words per page. Every now and then, many fewer. It’s a book you’re going to go through with a whoosh.

Also, stuff is happening right from the beginning, and stuff keeps happening. There are enough major plot twists to support three novels, all jammed in here. This definitely gives a nonstop-rush kind of feeling.

This story is put together well and, as I said, it’s fast paced. So the reader may not pause to reflect on how truly cluttered it actually is. Here come some very very broad spoilers, just in this one short paragraph below, so skip over if you want to avoid all spoilers:
+
+
+
+
+
+
+

We have BaiTech goons pursuing our refugees. We also have zombie hordes attacking within two of the three ships. (Not really zombies, and also BaiTech’s fault, but still.) We ALSO have an insane computer that practically says, “I’m sorry, Dave, I’m afraid I can’t do that” in so many words. I did say there was enough here for three novels, right?

Okay, that’s it for even broad, vague spoilers.

Actually, cluttered as it was, this story doesn’t feel all that messy or chaotic. All the elements tie together pretty well. Lots of violence and tragedy, but not generally too ultra-graphic about it. Plus the reader zooms along too fast to really think too much about the clutter.

However, I do want to mention one more detail I personally did not care for: the bad guys.

Apparently BaiTech committed this long-drawn out series of atrocities simply because it is so evil and all its employees are so evil? Or something? Even when – as is explicitly stated several times – it could have taken legal action against its business rival rather than murdering thousands and thousands of people. Sure, BaiTech clearly intends to leave no witnesses. Except you know what? The thousands and thousands of people on the BaiTech ships, each and every one of whom knows all about what has happened. Do the BaiTech higher-ups think they’ll all keep it buttoned? I haven’t seen such an implausible giant conspiracy since Myra Grant’s Newsflesh trilogy.

So, yeah. Even given the biggish reveal at the end, I have trouble swallowing the apparent motivations and impossible conspiracies of the bad guys.

OTOH, this is the first book of a series, you will recall, so possibly some more plausible motivation will emerge for the initial attack than atrocity-because-it’s-so-fun.