Just spotted a few items over the course of the past week — two weeks, since I was distracted last Tuesday and forgot to post. Let’s see …

A man with deadly brain cancer that had spread to his spine saw his tumors shrink and, for a time, completely vanish after a novel treatment to help his immune system attack his disease — another first in this promising field…The type of immunotherapy that 50-year-old Richard Grady received already has helped some people with blood cancers such as leukemia. But the way he was given it is new, and may allow its use not just for brain tumors but also other cancers that can spread, such as breast and lung…Grady was the first person to get the treatment dripped through a tube into a space in the brain where spinal fluid is made, sending it down the path the cancer traveled to his spine.

The sonogram performed during her 36th week of pregnancy in early summer produced jarring news for Nicole Bono — her developing son’s head appeared to have an abnormal shape.

Hey, don’t knock it. Don’t we all want a good excuse to take a nap when we hit those low-energy hours?

A new study that analyzed 3,000 Chinese adults over the age of 65 found that those who took an hour-long nap after lunch performed better on cognitive tests than those who took a shorter nap, longer nap or no nap at all.

I do question the “shorter nap” thing. I often take a much shorter nap in the afternoon, like 20 minutes or so, and I’m quite willing to bet money that I would perform better on a cognitive test after a nap than before.

Here’s something interesting and quite unexpected:

It’s official: A brand-new human organ has been classified

I mean, seriously? After all this time, we’re discovering a whole new *organ*? In science fiction, it would be in or near the brain and it would have to do with psionics or something. In the real world:

Researchers have classified a brand-new organ inside our bodies, one that’s been hiding in plain sight in our digestive system this whole time. … Although we now know about the structure of this new organ, its function is still poorly understood, and studying it could be the key to better understanding and treatment of abdominal and digestive disease. … Known as the mesentery, the new organ is found in our digestive systems, and was long thought to be made up of fragmented, separate structures. But recent research has shown that it’s actually one, continuous organ.

What are we going to discover next, I wonder?

This one is just fun:

It stretches for a distance of 151 miles across and has a maximum depth of about 848 metres….Some researchers believe it is the remains of a truly massive asteroid which was more than twice the size of the Chicxulub space rock which wiped out the dinosaurs….If this explanation is true, it could mean this killer asteroid caused the Permian–Triassic extinction event which killed 96 percent of Earth’s sea creatures and up to 70 percent of the vertebrate organisms living on land….However, the wilder minds of the internet have come up with their own theories, with some conspiracy theorists claiming it could be a massive UFO base or a portal to a mysterious underworld called the Hollow Earth.

I think it’s neat enough to find the explanation for the dramatic P-T extinction. But of course we all know what this REALLY is: 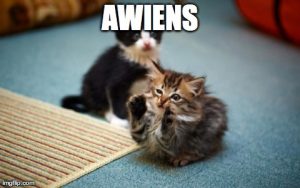