I hope you all had a merry Christmas, if you celebrate Christmas, or at the very least a pleasant weekend. A nice quiet Christmas here: all adults, no children. Nice, but not as exciting as a Christmas with lots of kids running all over the place.

We had such a non-white Christmas here in south-central Missouri: sixty degrees and light mist/drizzle/fog all day. It’s going to be the same today, I believe. Possibly it will be dry enough to take a couple of the dogs hiking. Still, though I do like a white Christmas, this is far nicer than an ice storm.

Meanwhile, recent reading — lately I’ve had more time than usual for reading, plus this dratted cold is dragging on a bit, which makes me look for comfort reads. So I finally opened up almost my last unread Andrea K Höst novel, Stained Glass Monsters:

When a motionless woman dressed in white appears in the village of Falk, Kendall has no inkling that the strange apparition will soon leave her homeless and tangled in the affairs of mages and monsters…

What a creepy image that is. An unconscious woman in white, lying on her back with her arms spread. Too heavy for anyone to lift, the air surrounding her heavy as well.

No doubt in a different kind of story the woman would seem helpless. Harmless. Saving her could be the object of someone’s quest. Not in this story. In this story, she’s a portent of disaster.

Kendall is kind of at the edge of events through the whole first book of this duology. She might be a mage someday, but at the moment she just makes pebbles quiver slightly. She’s an interesting pov character, though. Suspicious, practical, irreverent. Not accustomed to magic or well versed in history, which allows Höst to explain things to the reader smoothly and unobtrusively.

It seems that several hundred years ago, a mage queen tried an experimental bit of sorcery which was supposed to make her a goddess. This kind of went wrong in several unexpected ways. We’re seeing the conclusion of those events now, as her descendent, Rennyn Montjuste-Surclere works to prevent disaster and set things right.

There, I think that’s fairly accurate as well as extremely vague and spoiler-free.

The characters: Kendall is a perfectly fine pov character, but the protagonist I appreciated most was Rennyn. In her confidence and strength, she reminds me of Maskelle in Martha Wells’ Wheel of Time. Like Maskelle, Rennyn has no need to be concerned about life’s little inconveniences and problems and dangers. As you might imagine, this leaves the big problems and dangers.

The plotting: Andrea K Höst pulls off startling plot twists better than practically anybody else I can think of. These books aren’t as extreme that way as the Medair duology or And All the Stars . . . to be fair, not much equals the plot twist in And All the Stars . . . but there are definite surprises. I certainly didn’t work out Rennyn’s plan ahead of time. Or, in the second book, what was going to happen with her Wicked Uncle. These things make sense in context, but they’re pretty darn startling.

Light did weird things to the Kellian. Sunlight turned them golden, their eyes yellow disks, their hair and nails pale flames. At full moon, they were silver, and they even went a kind of rose during a painted dawn. Kendall had never seen one in light as strong as this, and for a moment couldn’t even tell who it was, saw only a vaguely human shape of burning blue-white. Even the clothing was lit or lost in the glare.

But of course it was Captain Faille. One lighting-tipped hand found Rennyn’s throat, touched, her cheek, then he picked up a cloak from the seat opposite and laid it over them.

Oh, well, his role expands as you go through the first book and he is an important character almost from the beginning of The Sleeping Life. 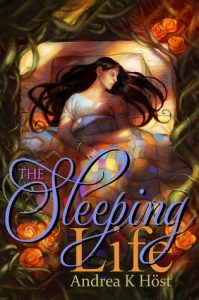 But I almost always particularly appreciate Höst’s male leads. Faille is no exception, but it takes a while for the reader to understand that he is in fact the male lead.

How does the Eferum duology compare to Höst’s other work?

I haven’t read Pyramids of London . . . waiting for more of the books in the series to be released . . . but I think I’m caught up other than those. So.

3. Medair duology. This is the other one I go back to and re-read bits of.

4. I love Aristide a whole bunch, so I would tend to put The Bones of the Fair next. Then the rest are hard to sort out.

How about you all? How would you sort out Andrea Höst’s books (those you’ve read)?