Let’s start with the weird and interesting today, shall we? I think this first item fits the bill:

Professor Erik Verlinde, an expert in string theory from the University of Amsterdam and the Delta Institute of Theoretical Physics, thinks that gravity is not a fundamental force of nature because it’s not always there. Instead it’s “emergent” – coming into existence from changes in microscopic bits of information in the structure of spacetime.

I love it! Gravity isn’t really there! I don’t have the background to believe that this makes sense / conclude it is nonsense, but it’s neat. This guy also argues that there’s no such thing as dark matter. Sounds reasonable to me. The idea that there’s some mysterious matter that makes up 95% of the universe but can’t be detected . . . to a nonphysicist, that does sound a trifle like special pleading to justify a special theory.

The Secret is Out: Scientists Figured Out How Tardigrades Became Immune to Radiation

Tardigrades are amazing creatures famous for their extreme survival skills. Their collection of abilities make up for their small stature. They are capable of surviving under the harshest conditions including the vacuum of outer space, extreme temperatures, great pressure (equivalent to six times as much pressure under the ocean), dehydration, and being frozen solid for years…. To top it off, tardigrades can survive radiation levels that are very lethal to most organisms. Now, scientists have finally unlocked what makes this all possible. 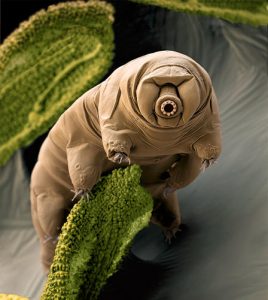 Tardigrades are described by Wikipedia thus: “Tardigrades (/ˈtɑːrdɪˌɡreɪd/; also known as water bears or moss piglets) are water-dwelling, eight-legged, segmented micro-animals.” I love this discription. They sound perfect for an SF novel. If you blow them up out of the micro-animal size, of course.

Alas, this isn’t a real spaceship:

In April, a team of scientists including Stephen Hawking announced a mind-boggling new project to explore interstellar space, using lasers to propel a nano-spacecraft the size of a postage stamp to our nearest star system, Alpha Centauri.

I mean, that’s cool and all, but … the size of a postage stamp? Somehow I would be more impressed by, say, a colony ship.

The remarkable recovery of a woman with advanced colon cancer, after treatment with cells from her own immune system, may lead to new options for thousands of other patients with colon or pancreatic cancer, researchers are reporting. Her treatment was the first to successfully target a common cancer mutation that scientists have tried to attack for decades. Until now, that mutation has been bulletproof, so resistant to every attempt at treatment that scientists have described it as “undruggable.” The patient … has an unusual genetic makeup that allowed the treatment to work. She is now cancer-free, though not considered cured. The treatment was a form of immunotherapy, which enlists a patient’s immune system to fight disease. The field is revolutionizing cancer treatment.

I bet we all know someone who’s died of colon cancer. Faster, please.

“This is a hope of independence. These cars will change the life prospects of people such as myself. I want very much to become a member of the driving public again.”

That’s exactly what it is. MUCH faster, please!

Controlling a Hand Exoskeleton With Your Mind

Researchers have developed a hand exoskeleton that can be controlled solely by thoughts and eye movements, according to a report published yesterday in the inaugural issue of Science Robotics. Six quadriplegic individuals tested the device in everyday situations; they successfully picked up coffee cups, ate donuts, squeezed sponges, and signed documents, the researchers reported.

This sort of thing looks like magic to me. The best kind of magic! The people who are developing this technology, wow, what a service to the world.