I picked up this book after meeting Tex, complete with what seems to be a signature scarlet Stetson hat, at Archon this past fall. She writes weird westerns, she said.

One Night in Sixes is indeed a weird western. Oh yes. It certainly is. 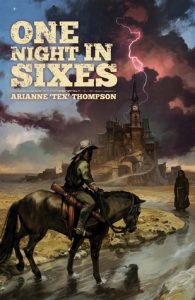 On the third day, God said: Now you just stay there and think about what you did.

So Elim stood there where they’d tied his hands to the two posts of the main street promenade, leaning into the dwindling shade as the sun climbed higher. The rest of the dust-choked street was long sense deserted.

Which left just Elim, standing spread-armed between the beams, struggling to keep his aching head shaded and his sluggish thoughts pious as his bare back and shoulders roasted in the sun.

That is certainly a catchy first line. Elim is perhaps not quite coherent at this moment, I will add.

Let me tell you about this world. It’s something else, that’s for sure. It’s kind of like the Old West, if the various native tribes weren’t human, possessed magic, threw out the white Northmen who attempted to settle their lands, and went on about their own somewhat mysterious business. For example, there are the a’Krah, the crow people; and the Ara-Naure, the dog people; and the mereaux, the fish people, who sometimes go to quite a lot of trouble so they can pass for human. Or at least not fish people. Also, of course, there are Northmen, from Eaden, who are white. And retain an ability to chill or freeze items, so they too fit the “weird” criterion.

People of mixed race are called mules or appaloosas or piebalds or two-bloods and as you might guess from this list of terms, they are often spotted or colored in patches. What an idea, eh? There’s a lot of prejudice against them, one gathers.

Elim is an appaloosa two-blood, and his companion Sil is a young Northman, something between a friend and an employer and a kid Elim’s supposed to look after. They have, perhaps unwisely, entered the lands of the indigenous tribes in order to pursue matters of trade. The snippet above is from the prologue. After that we go back and see how Elim got into this fix and after that we go on and see what happens next.

What I liked: Thompson’s writing is very good. The worldbuilding is extremely good, thoroughly peculiar and detailed and elaborate, with plenty of history. Incidentally, there is a glossary in the back which you may find helpful if you try this. I wish I’d noticed that before I read the book.

What gave me trouble: I had a hard time with the two main characters. I sort of liked them both. Thompson did an admirable job giving each of them a very different and opposing point of view, but while I admired how she handled this, I had difficulty trying to figure out whether either Elim or Sil was actually right in his perception of what was going on. Basically not, it turns out. I think this made it difficult to connect emotionally with either protagonist. I value competence in a protagonist, and neither Elim nor Sil actually handled the situation they got into very well, though their flaws and strengths are very different and so they wind up in very different places at the end.

Also, there were a lot of shorter bits from many other points of view, and I had trouble seeing how everything fit together. But I think this was mostly a problem that arose from a failure to connect to the main protagonists. Without that connection, I just wasn’t too interested in figuring out the complicated details of the setting and story.

The general feel of this story is definitely on the gritty end of the spectrum; a little too much so for me, probably. That also stopped me from really falling into the story. It took me a long time to read the whole thing because I kept putting it down to read something more approachable. On the other hand, I kept coming back to it, and you know I don’t generally finish books I dislike. I don’t think this story is going to wind up actually grimdark, but it continues in at least one sequel, so without reaching the ending, it’s hard to be sure.

Who should try this story: If you enjoyed Stephen King’s Dark Tower series, I bet you’d love this. Ditto with the Gunslinger series. I didn’t like either of those – I liked this better, in fact, both for the worldbuilding and for the actual writing. But I think those are the series that definitely fit in the same subgenre and have a lot of the same feel to them.