I rather like this post by Nancy Friedman at Fritinancy, a blog which evidently focuses on names, brands, and the writing associated with commerce. 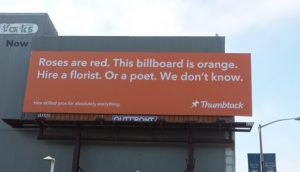 And here is what Friedman says about it:

It’s not that I don’t get the tiny, unconvincing joke, O Hipster Ad Agency. Nothing rhymes with orange. Haha.

Here’s the thing (and it pains me to have to point this out):

Billboards are meant to grab your attention in a split-second. They’re not supposed to be convoluted in-jokes. They’re supposed to sell.

And they’re supposed to sell your stuff. Not roses, not “this billboard,” not even florists or poets. If you’re Thumbtack, you want people who see your ad to grok the glories of Thumbtack.

At the risk of repeating myself: We don’t know? Are you effing kidding me? Your website says you’re “reshaping local economies.” You’re “getting things done.” If you don’t know, who does?

And finally: Why is the most important message – “Hire skilled pros for absolutely everything” – in the tiniest type?

Actually I did not quite get the joke. I will defend myself by noting that, as Friedman points out, I was not looking for a convoluted joke on this billboard. That’s not what I expect from billboards. Wordplay, maybe, but something very simple and catchy.

Also, yes, it’s quite puzzling why anybody would put the actual advertisement part of the billboard’s message in practically unreadable type. I guess we can file that in: Somebody overthought this one a little too much.