I like this one, which actually makes me think of Cordelia Naismith. Remember how she feels about eating real animals? Well, check this out:

Lab-grown meat may be meal of the future

The final step will be to bypass the animals altogether and create meat in a lab.

A couple years ago the $300,000 hamburger made the news. This burger was made entirely of lab-grown meat at enormous cost. No cow involved. The benefit of cultured meat is that it avoids the use of growth hormones and antibiotics (many farmed animals are pumped full of them), thereby avoiding unnecessary exposure to drugs we don’t need, antibiotic resistance, and cost.

I’m not actually a bit worried about the health problems said to be associated with eating meat — the article emphasizes this aspect, but Gary Taubes persuaded me that actually the health benefits all point the other way: that a diet high in animal protein is vastly better for you than a diet that emphasizes carbohydrates. But. I really am not a fan of modern mass-produced animal farming. Sure, I buy meat. But I would be very pleased to see the majority of the meat on grocery store shelves come from labs instead of farm animals.

Speaking of meat and health:

A recent study led by Stony Brook University’s Cheng-Shiuan Lee took advantage of an archive of Atlantic bluefin tuna tissue samples from fish caught between 2004 and 2012 to find out whether mercury levels are improving as regulations and declining coal use reduce North American emissions that drift over the Atlantic. … each age group showed a consistent pattern of declining mercury concentrations — a drop of about 19 percent between 2004 and 2012. Because of the age of the fish, that actually represents changes in the Atlantic Ocean going back to about 1990.

Good to know! Let’s keep going with the reduction in mercury pollution! I expect the tuna would be happier with less mercury in their prey species, too.

Okay, now about this next item — very SF —

Japan Testing “Space Tether” to Knock Junk Out of Orbit

The KITE experiment will use a half-mile long cable to guide some of the 500,000 chunks of space junk out of orbit … According to JAXA, Japan’s space agency, the anti-space junk measure—known as the Kounotori Integrated Tether Experiment (KITE)—will be tested for a week before Kounotori burns up in Earth’s atmosphere. The 2,296-foot line is weighted at its outer end by a 44-pound mass. Its movement through Earth’s magnetic field generates an electric current that can help redirect space junk towards the lower atmosphere, where it is destroyed. … It’s one of many projects aimed at dealing with space junk, a problem that is growing worse year by year.

Here’s one that caught my eye — wouldn’t this be great for a whole lot of worried parents:

A new minimally invasive technique for repairing the most common cardiac birth defect in extremely premature newborns can be performed safely with a high success rate in babies as small as 755 grams – about 1.6 pounds – only a few days after birth. … The study, published in the Journal of the American College of Cardiology: Cardiovascular Interventions, details the results of a catheter-based approach to repairing patent ductus arteriosus (PDA), commonly referred to as “a hole in the heart. … If left untreated, PDA can cause heart failure and lifelong complications,” said Evan M. Zahn, MD, an expert in congenital heart disease and director of the Cedars-Sinai Heart Institute’s Guerin Family Congenital Heart Program. “Current treatment options are not optimal and are fraught with complications.”

Yeah, I don’t know about prematurity, but PDA is pretty common in puppies, too. And a lot of puppies are smaller than one and a half pounds. I’d like to see this technique refined and made available for dogs, too. But it’s a great thing as it is.

This next one is not good news as such, it’s just neat:

Parrotlets flying through a field of lasers and microparticles helped test three popular models that predict the lift generated by flying animals. The work could help develop better flying robots.

Parrotlets! I’ve never heard of such a bird before. They must be some little miniature parrot? Here’s what Google shows me: 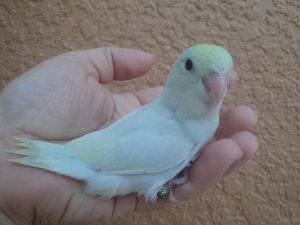 The protective goggles are tight, the chin strap secure. Conditions are calm and the lasers are ready; the air is infused with tiny aerosol particles that are primed to scatter and track at the slightest disruption. Wait for the signal.

It’s just another day at the office for a parrotlet named Obi.

And along with birds paving the way for flying robots, here’s a jumping robot that mimics a primate:

A jumping robot — whose design was inspired by small primates known as bush babies — can spring off walls to gain height faster than any previous robot and could one day help rapidly scan urban disaster zones, researchers say. … Despite being just 10 inches (26 centimeters) tall and weighing only 0.2 pounds (100 grams), the one-legged robot, named Salto, can leap up more than 3.2 feet (1 meter) high from a standing position.

Now, bushbabies I’m familiar with! Here’s how they jump — in a vertical posture — a lot of prosimians jump like this: 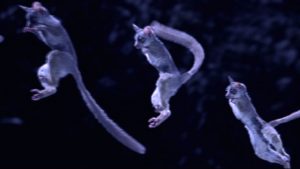