Who knows how long I’ll keep this up? But I keep noticing links to good things. So here, appropriately right before Thanksgiving, another list of Good Stuff you might not have heard of:

Two years ago, Teddy fell down a Topanga Canyon, California, hillside and suffered a traumatic brain injury that left him with a gaping hole in his skull. … “This was a remarkable defect,” his doctor, Dr. Mark Urata, told CBS Los Angeles. “It was close to 50 percent of his skull that was gone.”

…Last month, the first-grader received a 3D-printed skull implant that fits perfectly with his existing skull bone structure. The implant is no ordinary plastic — it’s made from a material called PolyEtherEtherKetone (PEEK), which has roughly the same physical properties as a real skull. The surgery was successful and Teddy is now back to being an active kid.

Amazing pictures at the link. Hooray for modern medical technology! On the same theme:

A paralysed woman in the Netherlands is the first to be fitted with a new type of brain implant that allows patients who cannot speak or move to communicate using nothing but their thoughts. The new implant, which works with a computer interface to help her spell out words and sentences, can be used anywhere, allowing her to communicate with people in the outside world, without medical experts on hand to help. … one in three people with ALS eventually lose the ability to move even their eyes. Ramsay wanted to figure out how to build a system that didn’t rely on any kind of physical movement at all. … This meant one thing – a mind-reading device.

Changing the world in a way that really matters, one locked-in patient at a time! I can see the day when paralysis is simply not a life sentence anymore. Faster, please!

According to a new studying published in the international science journal Nature, some areas of coral reefs are thriving! … The study surveyed 2,500 reefs in 46 countries. Surprisingly, the 15 reefs with the most robust fish populations were not in the remote areas with low fishing activity. Scientists concluded that these reefs, mostly found in the Pacific Ocean, such as Kiribati and the Solomon Islands, benefit from responsible management on the part of local government. The traditional customs of the regions, including rotational fishing and the prevention of over-fishing by outside groups, allows the reefs to recover from human interaction.

Grizzly bears were first listed as threatened in 1975 when the Yellowstone population was estimated to have as few as 136 bears. Recent estimates say the population is now above 700.

A fuzzy-headed baby sarus crane hatched on a rural farm this fall offers a glimmer of hope for wildlife conservationists, organic farming advocates and a nation grieving after the death of their beloved king. That’s because this chubby chick named Rice is the first of its auspicious species to survive after hatching in the wild in Thailand in 50 years.

Scientists have discovered wild Tasmanian devils that have recovered from the facial cancer that has decimated the species over the past 20 years. Dr. Rodrigo Hamede from the University of Tasmania said he hoped this was the beginning of a much brighter future for the devils. ‘It is rewarding and it also puts the future in a more, sort of encouraging scenario.’ 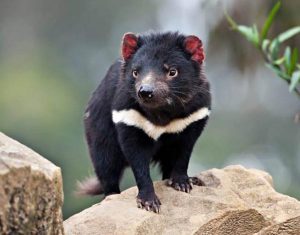 Moving on to history —

Experts have discovered a third structure within the Kukulkan pyramid in eastern Mexico, revealing that it was built like a “Russian nesting doll”, experts said on Wednesday. … A 10-metre-tall pyramid was found within another 20metre structure, which itself is enveloped by the 30-metre exterior visible at the Maya archeological complex known as Chichen Itza in Yucatán state.

I just think that’s pretty neat. Here’s something else historical, though it hasn’t quite gotten underway yet —

Israel is embarking on a major archaeological expedition to find yet undiscovered Dead Sea Scrolls, an Israeli antiquities official said Monday. … Amir Ganor of the Israel Antiquities Authority said a government research team will spend the next three years surveying hundreds of caves in the Judean Desert near the Dead Sea, the arid region where the Dead Sea Scrolls, the world’s oldest biblical manuscripts, were preserved for thousands of years and discovered in 1947.

1 thought on “The Weekly Roundup of Good News”