And the theme this month is … parenthood.

Or so it seems, after reading firstSilence and Touch by Michelle Sagara and now Unquiet Land by Sharon Shinn.

This is a theme I often particularly appreciate, apparently, though I hadn’t exactly noticed before.

Well, to some extent I guess I had noticed. I mean, my favorite component of the Veronica Mars tv show was the relationship between Veronica and her father, Keith. And one reason I liked Softly Falling best of the Carla Kelly romances I’ve read so far was that I liked how Kelly handled the father in that story best – he was more complex, flawed but redeemable. The reason my favorite of Sarah Addison Allen’s novels is The Girl Who Chased the Moon is because I love the subplot that involves a mother who gave up her baby for adoption trying to coax her daughter back to her through her baking. And so on.

In Sagara’s Queen of the Dead series, we have important relationships between Emma and her mother, Emma and her father, Michael and his mother, Eric and the father-figure of Earnest and (unexpectedly complex) between a couple of ghost children and their mothers. The later relationships are handled with such sensitivity and compassion; they’re a big reason the series appeals to me so much.

Well, Unquiet Land is my favorite of the Elemental Blessings series novels since the first Troubled Waters. I liked the second book fine, but the primary relationship is the romance between Josetta and Rafe; I like the third book as well, but the primary story is of Corene growing into herself. 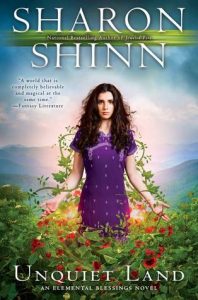 Unquiet Land picks up where the third book left off, but focuses on someone more or less tangential to the story as we’ve seen it so far: Leah, whom Corene met in the Jeweled Fire. And the primary story is not Leah sorting out her romantic life, though that happens. It involves Leah recovering her relationship with the daughter she abandoned at birth. Abandoned in the sense of leaving the baby with her own highly competent and loving foster parents; this is an issue, but not a gritty, grim kind of Issue.

This plot element worked well for me. Also it brought the overall story back in a satisfying circle to the initial situation you may recall from the first book, dealing with a major loose thread. Remember Mally, the little girl who was used as a double for Princess Odelia? Well, Mally is actually Leah’s daughter, and in this final book of the series, she finally gets a life of her own. About time, too.

a) The romance: There’s always a romance in a Sharon Shinn novel, and I liked this one. Chandran is a good male lead. Of course anybody who always draws “honor” as one of his blessing is naturally going to appeal to me. His backstory is interesting, and I must add, if you are going to visit this world, you totally want to land in Welce, NOT in any neighboring country. The people of the Kaskades, ugh, they might be as bad as those creepy Soechin perverts. So, yeah, Chandran’s getting himself free of his Kaskadian wife, one can only sympathize.

b) The daughter: Sure, Leah has a pretty easy time getting things sorted out with her daughter. But after all, Mally was raised by loving foster parents, even if she was also dragged into the fake-princess thing. The Elemental Blessings series offers warm-fuzzy stories. One doesn’t expect relationships to be too fraught. A little more difficulty or complexity would have probably appealed to me, but the story was fine as it was.

c) Dealing with the bad guys: For a competent person, Darien might have been a little quicker off the mark in dealing with the Kaskadian people. I get that practicality is a concern when you are working out your country’s relationships with its neighbors. It’s not like Shinn didn’t explicitly address the problems Darien is facing. Still, in his place, I would be inclined to post a formal notice that certain crimes, if committed in Welce, are likely to result in perpetrators being hanged if they escape being beaten to death by a mob, and that diplomatic immunity won’t cover these crimes, so Soechin and Kaskadian people should enter the country at their own risk.

I will add again, this *is* a warm and fuzzy Shinn novel, so nothing too awful actually happens in the book. It’s just that the potential for awful is so clear.

For me, Troubled Waters is still the standout, but all four books are delightful and Unquiet Earth was a worthy wrap-up for the series.

If you’re well acquainted with Shinn’s work, which of her books particularly stand out for you?