My goodness, now I so much want to read the third book! (GRAVE.) And it’s not out yet! Soon, though; February, if I recall what Amazon said about it. Sagara’s been taking her time with this trilogy, two years apart, but sometimes that happens.

Let me see, I believe I picked up the first book on the Free Books table at WorldCon. 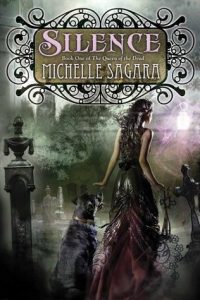 Good choice on my part; also a good tactical decision for the publisher (DAW) to spread some copies around considering the third book is due out early next year. I mean, I’ve preordered it.

Okay, I’ve only tried one other book by Michelle Sagara West, HUNTER’S OATH, and it was just okay for me. I liked this Queen of the Dead series a great deal better. It’s entirely different: contemporary YA with mostly one protagonist. Switching pov was something that didn’t work for me in the earlier Sagara West book, but the occasional scenes from other pov characters in this series were fine. Even the second-person prologue in the second book, which is certainly a tricky kind of thing to pull off.

So, let me orient you to this series: Emma is a Necromancer, or something like a Necromancer. In this world, Necromancers are pretty much totally evil. They chain the dead and draw on them for power. Also, because life is so short compared to death, they think nothing of killing people. What’s a few years if someone’s going to die anyway in the end?

At the top of the Necromancer food chain is the Queen of the Dead, who has closed off the way that the dead would take to (apparently) Heaven, in order (I presume) to keep them available so she and her Necromancers can use them as so many little power sources.

Okay, so as I say, that’s evil. But there are also people who oppose the Necromancers. Some of the hunters may be not quite ordinary human people. Some of the are just . . . really motivated. But they are not exactly knights on white steeds either. For one thing, they’re fine with killing people who might be recruited by the Necromancers, even if those people haven’t done anything nasty yet. For another, they are themselves completely unconcerned about the fate of the dead.

This is a “closed world,” so ordinary people don’t know about any of this. Certainly not Emma, until she bumps into an creepy ancient woman in a graveyard, is given a special gift, and wakes up a Necromancer. Or maybe not. It’s not clear whether Emma can chain and use the dead. It’s perfectly clear that she is totally opposed to the whole idea. She’s not real keen on the hunters, either, because they’re no more interested in the wellbeing of the dead than the Necromancers. What Emma wants is what any decent person would want: to free the dead.

What makes this book work:

Emma is surrounded by friends; really good, solid friends; and by relatives; and by the relatives of friends. These books are really about friendship and parenthood and relationships.

“He’s not asking me to walk out on my Best Friend; he’s asking me to walk out on my own life. He’s asking me to be so afraid for my own safety that I’m willing to just leave you behind. And I could,” she added. “But it would change what friendship means – to me – forever. I could never, ever throw my whole heart into it, because if things were too dark or too scary, I’d know, in advance, that I’d be ducking, hiding, and running for cover. It’s not about you, really. It’s about me.”

Isn’t that wonderful? I wish I’d written those lines.

Anyway, I love how Sagara handles all the relationships in this book. It’s a crowded story: Emma and her mother and her father and her mother’s friend; Emma’s best friend Allison and her friend Amy and their friend Michael. And Eric and Chase. And a whole bunch of other less important characters. So as you see, a crowd, but Sagara brings them all to distinctive life. Also, Michael is autistic and I love the way he is such an intrinsic part of the inner circle of friends. Also, I can’t decide whether Amy really has some kind of superpower that has nothing to do with necromancy or not, but I love the way Popular Girls and Bookish Girls are both positively presented.

Also, Petal. That is such a ridiculous name for a Rottweiler. I really enjoyed both the dog and his name, and since we were just on the dogs-in-SFF topic, here you go, another fine example.

It’s not just the conflict between the Necromancers, who want to forcibly recruit Emma and incidentally keep on using the dead as though they were mindless electric plugs; nor the conflict between the Necromancers and the hunters, who are inclined to kill Emma to keep her from being recruited. It’s Emma’s deep conviction that the thing to do with ghosts is set them free and most definitely not leave them lost in memories of their various deaths.

But there’s also conflict embedded in that, since Emma’s deceased father is not planning on going anywhere until his daughter is safe. And her deceased boyfriend still loves Emma, but is desperately vulnerable to the Queen of the Dead. This story has plenty of action, but you see it really is all about relationships: parent-child relationships as much as any others.

The writing is invisible and disappears into the story. Even in the second-person bit, the writing doesn’t draw attention to itself. The worldbuilding is interesting, and with a closed-world contemporary setting, the books are easy to get into. There is some romance, but the angst level is minimal given the deceased boyfriend.

If you don’t mind using the term noblebright while we work to come up with something less corny sounding, then these books could practically define the genre.

As I said, I preordered the third book as soon as I finished the second. It’s going on my top ten most-anticipated list for next year.

2 thoughts on “Recent Reading: SILENCE and TOUCH by Michelle Sagara”