Okay, anybody know the story behind what happened with this series and whether it’s likely to be completed in the semi-near future? Because there’s an excerpt from the second book in the back of this ARC, but evidently the second book was never actually published. Very odd. THE LOST came out from Harlequin, btw, so it’s not like they went unexpectedly bankrupt, I presume. Whatever happened, the publisher likely still holds the rights to the first book, which may be why Durst hasn’t moved ahead with self-publishing the second.

But! All this oddness aside, actually the first book is self-contained and reads perfectly well alone, so there’s no reason not to pick it up if you think it should intriguing. I liked it a lot, personally. 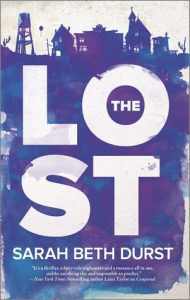 Things I lost:
a stick of Chapstick
a few quarters
one turquoise earring, a gift
my old college roommate’s new phone number
my left sandal
Mr Rabbit, my favorite stuffie from my preschool years
my way

Things that are lost wind up in the town of Lost, including foreclosed houses, a good many wallets and pieces of luggage, and the sandwich you put down after taking a bite and a dog ran off with it while your back was turned. A lot of dogs, for that matter, and not a few children, so this town is not a particularly sweet or fairy-tale kind of place.

On one particularly bad day, Lauren didn’t turn left at proceed on her familiar way to work. She drove straight on and straight on, until she lost her way and herself and wound up in Lost. The denizens of Lost tend to be rather creepy. Some of them lost something important, generally something metaphorical, and are stuck until they find it. Some of them may be dead. None of them can leave without the help of the Missing Man . . . I never did understand why he would be called that. He’s a creepy figure.

Besides the Missing Man, there’s a Peter Pan analogue: a grown-up sexy Peter who tends to speak in snatches of poetry. This is not even faintly a Peter Pan retelling, however, though I’m sure the name Peter was chosen deliberately.

So you can see the basic outline of the story from these elements. There’s more to it. Lauren needs to find what she lost; she also needs to understand her potential role in the town of Lost. She also needs to sort out what Peter means to her, or might mean. I don’t want to give too much away, so I’ll leave it at that. I will say, though, that Lauren seems:

A) Somewhat slow to catch on; I was pretty impatient with her for a while.

C) Still, Lauren is an engaging protagonist who grew on me as the story unrolled. But for me the little girl, Claire, stole the show.

D) The ending, despite whatever derailed the second book, is pretty much perfect.

4 thoughts on “Recent Reading: THE LOST by Sarah Beth Durst”