The Romans meet the Cahokian mound builders, in a particularly imaginative alternate history. (Where do authors get their ideas? I ask myself that roughly as often as any non-author, probably.) 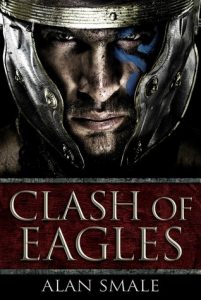 It’s 1218 AD, according to the calendar of the Christ-Risen. It’s 1,972 years since Rome was founded. In this world, it never fell. The Roman Empire today controls everything from the Norsemen of Scandinavia to Britain to all of Europe, then south to Sub-Saharan Africa and all the way east to the Ganges River. So. That’s Rome.

Rome’s having trouble expanding eastward, though, what with the Mongols and Turks. So isn’t it lucky they’ve discovered a new continent? New Hesperia promises new lands and heaps of gold. What Roman Emperor could resist? So here’s the 33rd Legion, under the command of Gaius Marcellinus, landing in the bay called Chesapica and marching west, west, ever west, cutting their arrow-straight road through the endless forest and building a small town every evening. The Iroqua pick off the odd Roman soldier, but mostly just stay out of their way.

And then there’s Cahokia. You know, there’s no proof the Cahokians didn’t have hang-gliders. No one actually knows much about the Cahokians or the mound-builder society in general, and after all the components of hang-gliders wouldn’t last terribly well.

Well, Alan Smale had to do something to make the Cahokians a match for a Roman legion, right? And he might as well pick something really fun while he was at it, right? So, hang-gliders. Also another little innovation that I don’t want to give away, but that plausibly allows the Cahokians to defeat the Romans in double quick time during their first meeting.

Now, since I grew up in St Louis, I’m pretty familiar with Cahokia. I don’t know how many school trips took us out there, but more than a coupld. I’m really pleased to see Cahokia front-and-center in an alternate history, because it was quite something. The city and immediate environs probably had a population of 20,000 or so, which is certainly not peanuts. The biggest mound is 1000 square feet at the base and 100 feet high, overlooking a carefully leveled grand plaza of about 50 acres, the whole surrounded by a two-mile palisade. Smale includes appendices about this stuff for the interested reader, so I didn’t have to stop and look up the numbers for any of that.

But this isn’t a history. It’s a historical novel, with plenty of action and lots of great characters, starting with Marcellinus. Now, I do think possibly Marcellinus is a little too good to be true. Still, I had no trouble rooting for him as the story unrolled. He (and the Cahokians, once he’s drawn into their society) certainly have major obstacles to overcome. Even with all Marcellinus can teach the Cahokians about metallurgy and tactics, they don’t have everything their own way. In fact, let me just mention, Marcellinus in particular is in kind of a tight spot at the end of this book. It’s not quite a cliffhanger of an ending, but it leans that way.

On the other hand, the second book, Eagle in Exile came out this year and the third is due out in 2017, so not too much waiting involved.

If you’re a fan of alternate history, or if you like historicals generally, you really should give this one a try. The writing is good, the characterization is good, the setting is fabulous, and while I wouldn’t believe in just every detail about the hang-gliders without running them past somebody better at physics than I am, they are a wildly entertaining worldbuilding item. I won’t be waiting long before starting the second book, and I’m sure I’ll be waiting impatiently for the third.

3 thoughts on “Recent Reading: <em>Clash of Eagles</em> by Alan Smale”