So, back to KidLitCon (I am gradually typing up notes, you may have guessed).

A panel I attended on Saturday was about, I don’t remember the wording, but heavy topics in YA and books that deal with those topics. A big long list of topics was brainstormed – everything you can think of from addiction to rape and suicide. As I say, heavy topics. The moderator of the panel was Pam Margolis of An Unconventional Librarian blog, and the featured author was Rita Arens, author of a YA novel about, I gather, a girl’s descent into and recovery from anorexia.

Now, the best point made, I think, was that fiction can provide a safe way for young (and, come to that, not so young) readers to explore all kinds of painful issues. Though this is clearly true, my personal inclination as a young (and not so young) reader was to run the other way from “problem” novels. NO THANK YOU WHERE IS A FANTASY NOVEL about sums up my reaction to this kind of fiction. So now I am curious! When you all were teenagers, and now that you (many of you) are older, did you and do you feel drawn toward realistic or contemporary novels that featured these kinds of issues?

Wait, wait, let me add, of course secondary world fantasy can and totally does address heavy topics too! Grief, loss, sex, pregnancy, disability, bullying, being a pariah among your peers, physical and emotional abuse – lots of these topics appear rather frequently in a great deal of fiction, including fantasy. I’m sure you can think of examples – it’s not hard. In fact, one might suggest that fantasy and other forms of less-realistic fiction allow a reader to take yet another step back from the topic and thus perhaps feel safer or more insulated from it. (I didn’t make that point during the panel (it only occurred to me right now) but I do wonder whether that is possibly something to keep in mind when recommending books to young readers. If, for example, someone is looking for a book that deals with disability and is interested in, say, neuroatypical conditions, a kid who likes fantasy might prefer Bone Gap to something with a realistic setting.)

Anyway, I want to finish off a little project started during the panel. Many specific novels were mentioned by attendees, but there was no time to link each to a specific topic. Here, then, is a list of those titles, with a very brief summary culled from the book’s description at Amazon.

In the order people called them out, which is to say basically no order at all:

The Obvious Game (Rita Arens) – An intense and honest look into the psychology of anorexia. Though I am still not into “Problem Novels,” this one actually sounds as though it might be something I might like (I am interested in the psychology of practically everything). I didn’t quite have a chance to buy this during KidLitCon, so I now have a copy on my Kindle. 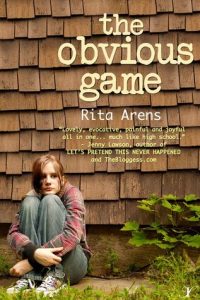 Tap Out (Eric Devine) – Gritty sports novel where the 17-year-old protagonist’s mother is regularly beaten up by her meth-using boyfriend and neighborhood dealers are trying to pull him into their circle. Tony finds respect, hope, and confidence at a mixed martial arts gym.

Lucy and Linh (Alice Pung) – Peer pressure, bullying, and “growing into the person you want to be without leaving yourself behind.”

All the Bright Places (Jennifer Niven) – When Finch and Jennifer meet on the ledge of the bell tower at school, it’s unclear who saves whom. Grief and preoccupation with death and suicide.

More Happy Than Not (Adam Silvera) – In the months after his father’s suicide, it’s tough for 16-year-old Aaron to find happiness again – but he’s still gunning for it. Looks like this one has a near-future SF component.

Peas and Carrots (Tanita Davis) – Foster care and PTSD, as Dess tries to fit in with her little brother’s foster family and overcome the lingering fear of her biological father.

The Impossible Knife of Memory (Laurie Anderson) – PTSD, obviously, as it says: For the past five years, Hayley and her father have been on the road, never staying long in one place as he struggles to escape the demons that have tortured him since his return from Iraq.

Thirteen Reasons Why (Jay Asher) – When Clay plays the cassette tape he receives in the male, he’s surprised to hear the voice of dead classmate Hannah. He’s one of 13 people who receives a tape, which details the circumstances that led to her suicide.

Speak (Laurie Anderson) – Since the beginning of the school year, Melinda has been struck mute. . . . deep down, she knows the real reason. A stunning and sympathetic tribute to the teenage outcast.

The Sky is Everywhere (Jandy Nelson) – this story of grief and recovery is the only book on this list I’ve actually read; also one of the most intense and beautiful books I’ve ever read in my life.

Belzhar (Meg Wolizer) – Devastated by the death of her first love, 15-year-old Jam Gallahue is having difficulty moving on with her life. This is a contemporary fantasy.

Aristotle and Dante (Benjamin Saenz) – The heart of the novel is Dante’s openness about his homosexuality and Ari’s suppression of his.

We Were Liars (E Lockhart) – Clever, alluring, and wildly addictive. The story of annual family reunions and the story of what happened during the summer that Prudence is unable to remember.

Afterward (Jennifer Mathieu) – A perceptive depiction of recovery from a trauma most of us have only read about in the news. When autistic 11-year-old Dylan is kidnapped, his rescue leads to the discovery of 15-year-old Ethan, who had gone on a bike ride four years earlier and had never been found.

The Five Stages of Andrew Browley (Shaun Hutchinson) – Andrew Brawley was supposed to die with the rest of his family. Now he lives in the hospital, serving food in the cafeteria and sleeping in a forgotten supply closet. Then one night Rusty is wheeled into the ER, half his body burned by his hateful classmates. To save Rusty, Drew will have to confront death, and life might get worse before it gets better.

Nothing Left to Burn (Patty Blount) – Told in the alternating voices of the main characters, Reece and Amanda, who are both on the Junior Squad of the local fire department. Reece’s brother was killed in a car accident when Reece was driving; Amanda is a foster child whose mother is in jail.

It’s Kind of a Funny Story (Ned Vizzini) – After school starts at his super elite high school, the protagonist finds his life spiraling out of control from the pressure, contemplates suicide and checks himself into a psychiatric hospital.

The Pregnancy Project (Gaby Rodriguez) – Gaby has always been expected to become a teen mom like her mother and sisters before her. She fakes her own pregnancy to see how everyone will react. A memoir.

The Sun is Also a Star (Nicola Yoon) – What a great title. Um, let’s see … Natasha is into science and doesn’t believe in love at first sight. Daniel is the boy she falls in love with at first sight, the day before her family is due to be deported. Doesn’t sound like my kind of thing (except for the girl being into science), but I see this one got starred reviews from nearly everyone. Oh, and it isn’t quite out yet; it comes out Nov 1.

Dirty Little Secrets (CJ Omololu) – I’m pretty sure this must be it, though there are several books with this title. Lucy’s got a secret – her mother is an out-of-control hoarder, something Lucy has been hiding from everyone. Then her mother dies suddenly and Lucy doesn’t want to report her mother’s death because everything will be revealed.

Okay, that’s 24 titles. Of course you understand these are very abbreviated descriptions; if you want to find out more about them you’ll have to go over to Amazon or Goodreads and check them out there.

As I mentioned, I loved The Sky is Everywhere; I also have read and liked Peas and Carrots and now have The Obvious Game. Of the rest, I think I might like Tap Out because of the martial arts component. Afterward also sounds like something I might at least look at. So does The Five Stages of Andrew Browley, oddly enough. The others, I don’t think so unless the right person recommended them, and maybe not then. The memoirs, definitely not – if I’m going to read about terrible things, I prefer them to be fictional!

I will add, at a separate panel, Kristi of Kristi’s Book Nook mentioned two more books that qualify as “Problem Novels” but that she (and I) find kind of horrifying:

What Happened to Ivy (Kathy Stinson) – in which a father drowns his 11-year-old disabled daughter. Or perhaps allows her to drown, it’s not clear from Kristi’s brief description but the latter is implied by the description at Amazon. Either way, that’s pretty extreme. Would you want your kid to pick that up off the shelf? My mother never read books before allowing us to read them – really, she would have had no time to do anything else ever if she had tried, plus she doesn’t like SFF. But I would not necessarily be super happy about just any kid reading this particular book. What do you think?

Watching Jimmy (Nancy Hartry) – At least in the above, the father must be at his wit’s end and desperate. In this one, Uncle Ted tries to kill his little nephew, apparently just because, thus rendering him disabled; and the boy’s best friend then has to shoulder the responsibility of looking out for Jimmy and protecting him from Uncle Ted. That’s quite a plot.

Yet Kristi mentioned a woman she knows whose 10-year-old daughter specifically seeks out books like this. Perhaps we’re back to fiction providing a safe way to approach frightening or disturbing topics.