So, first thing I did in October – a month in which I’m kinda taking a break from writing, though I can’t say it’s as complete a break as some – anyway, the first thing was to re-read The Raven Boys and then go on at last to read the other three books: The Dream Thieves, Blue Lily Lily Blue, and finally The Raven King, which just came out this year. 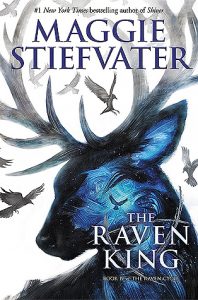 My goodness, can Maggie Steifvater write or what?

From The Dream Thieves:

“Whatever,” Ronan said. Which meant he’d do it.
Gansey looked at Blue. “Happy, Jane?”
Blue said, “Whatever.”
Which meant she was.

I love this snippet! This tidbit and a bit of the surrounding scene capture all three characters so well. Of course it’s almost impossible to pick out a bit because so many fragments of dialogue or thought or description are so perfect. Here’s another:

Okay, so the writing is just awesome. What about the story?

Now, I will say, points of view proliferate in unexpected ways, which ordinarily I am not too keen on. But this worked pretty well for me in this long, rather leisurely paced fantasy in a way that it probably wouldn’t in a shorter, faster story.

Blue is the first point-of-view protagonist, but we also get Gansey’s pov, Adam’s, Ronan’s, Mr. Gray’s, and several less important characters, including many of the various bad guys.

Blue is definitely one of my favorite protagonists of the year. She’s in the middle of figuring out who she is, with the bravery and honesty and self-reflection that you see sometimes in teenagers. She’s proud and passionate and sometimes rather ferocious, and she tries really hard but sometimes she makes mistakes.

Gansey is fine, Adam is fine, but Ronan is one of my favorite supporting characters of all time. Talk about ferocity. He has trouble framing his thoughts in words; it’s easier for him to frame them with violence of one kind or another. Plus he has a really interesting character arc and role in the plot that I didn’t see coming in the first book even given the raven. I do kind of wonder how much of this story Maggie Stiefvater had framed out in the beginning. There are enough elements that appear kind of out of the blue (so to speak) that I’m guessing she did a fair bit of making it up as she went along. That is not an impression I got in The Scorpio Races at all, but it is in this admittedly much bigger story.

For example, Mr. Gray. I quite liked him, but then I always have been fond of hit men. At least, the right kind of hit men, which he is. But his appearance in the second book was definitely not foreshadowed in the first – nothing connected to him was foreshadowed either. I had the same impression with Henry: that Stiefvater threw him into the 4th book kind of on impulse and then made up his role. (I liked Henry very much, but he did seem kind of like a random element added on impulse and then given stuff to do.)

Well, the series all hangs together well enough, so if Stiefvater hadn’t quite settled the major events in her mind ahead of time, she did a good job weaving everything together .

Lots of great family relationships in this series, too. Genetic families and otherwise. All the psychic women in Blue’s family – Maura and Persephone and Calla are the most important – and of course the Gansey-Ronan-Adam-Noah-Blue group, with Henry added rather suddenly midway through the last book. Good family relationships: Gansey’s family. Toxic family relationships, Adam’s parents.

As I say, it seemed to me that various elements might have been added kind of on a whim and then integrated after the fact. This isn’t exactly a flaw – they are integrated, after all. Besides, it may not even be true; maybe this series was plotted out from the beginning despite how it seems to me.

Other comments about the overall reading experience:

The story itself is surprisingly simple: We have Gansey’s question to find Glendower, and various complications that arise from that quest, and various friends that help and obstacles that get in his way. We’re pretty clear on the fact that Gansey’s going to die, what with Blue’s vision at the beginning of the first book and the warning about killing her true love with a kiss and all. I, at least, never really felt that it was at all likely that Gansey would really, truly die and stay dead. If you’ve read this series, were you particularly nervous about that?

Each book is amazingly self-contained considering the overall continuation of the main story. Great job with that. There’s really no need to read all four books back-to-back because plenty of threads get tied off in satisfying ways for each of the first three volumes. I will say, the whole series is fairly dark and the 4th book in particular is pretty much horror. By the time you reach it, though, you’re so caught up in the story that I doubt you’ll mind, even if, like me, you’re not ordinarily all that fond of horror.

So, all Gansey’s friends and allies help fulfil his quest and all the obstacles fall and . . . I don’t want to put a real spoiler in here, so I will just say that for me, one aspect of the climax did not really work all that well. I mean, it made sense given where the story needed to go, but it also felt like something of a letdown after such a long buildup. For me it didn’t even truly count as an unexpected plot twist; I could see that something had to go wrong with this element of the plot, so it was more a question of exactly how it would go wrong. Also, following that incident, the entire ending seemed to unfold rather briskly considering the leisurely pace of the entire series up to that point. Still, I don’t want to overemphasize this issue, because honestly the ending worked okay for me. Especially with the epilogue. I did rather miss Noah in the epilogue; or I suppose what I mean is, it seemed to me he ought to have been missed more by the other characters. But I do appreciate epilogues generally and this one was important to lend a sense of closure to the whole story.

A detail that bothered me more: I did not really care for Stiefvater’s decision to develop a relationship between Ronan and Adam. It seemed SO pat and handy. Blue falls in love with Gansey, and since there’s only one girl to three guys, that leaves two guys lonely. So hey! They can have their own relationship, problem solved. I could see the relationship more for Ronan than for Adam. There were hints of his feelings from the beginning. For Adam, much less so.

You know what would work for me in a YA novel? To see one character fall for someone and not have their feelings reciprocated. I believe that occasionally that awkward situation has been known to occur in real life. Especially to high-school-aged kids. In this case, that would have thrown the ball back in Adam’s court, and Blue’s, and Gansey’s. How would they deal with jealousy and feelings of exclusion? Well, no need to worry about it, because poof! The problem is lifted neatly out of the way by the hand of the author so everyone can live happily ever after.

Still, these are quibbles. I want to emphasize that this is a great series, with amazing writing and great characters and lots of wonderful elements. I personally think The Scorpio Races is the superior story, but that’s because I truly loved The Scorpio Races, not because this quadrilogy isn’t also really good.