Okay, also at KidLitCon, the MG writer Jen Swann Downey presented a really good talk on censorship (the theme of KidLitCon this year was Gatekeeping). This evidently fits her oeuvre because I gather the Lybrarians in her series use time travel to protect writers and artists all through history. 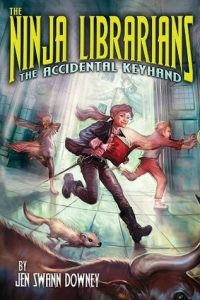 So, Downey drew on a talk she gave once to a lot of MG students, in which she did something clever:

First she showed slides of various writers and artists who have recently been silenced by their respective totalitarian governments and so on. She got the kids to react in horror and disgust to these incidents.

Then she said, Okay, now suppose that there’s a group in Your Town that is making a really good, persuasive case that dogs and cats ought to be outlawed within the borders of the town. Everyone who has a pet will have to get rid of it. If they can’t find another home for their puppy, they’ll have to have it euthanized . . . how many of you have a pet? Or want to have a pet? What do you think of this idea?

What if this group wants to put up a billboard and fliers promoting their agenda – no pets – should they be allowed to?

I bet you can see this coming! Free speech only for people we agree with! Bad opinions should be silenced.

Probably most of the kids eventually understood what they were doing, how they were switching sides in the free speech debate and why that’s wrong. Downey used this to illustrate the importance of basing your decisions on solid principles you’ve thought through properly beforehand: Without the principle as bedrock, it’s virtually impossible to make consistent decisions about issues involving morality and ethics.

Well, that’s certainly a useful talk to give these days, when the actual example kids see everywhere today in real life, especially on college campuses, is various groups trying their hardest to silence anyone who disagrees with them about anything and administrations going along out of lack of principle. Good for Downey, addressing the forces that can keep people silent and the importance of “gatekeeping with honor.”

I haven’t read any of her books, but I’m glad they’re out there and I’m thinking of giving one a try. She said she either has or will write one in which each of the young apprentice Lybrarians is assigned to protect a writer whose opinions they disagree with. That’s fantastic.