It’s a bold claim. Two astronomers think they have spotted messages from not just one extraterrestrial civilisation, but 234 of them. The news has sparked a lively debate in the field as other astronomers think the claim is premature and are working fast to get to the bottom of the signals.

I would say that this sounds like a bold claim, yes.

In 2012, Ermanno Borra at Laval University in Quebec suggested that an extraterrestrial civilisation might use a laser as a means of interstellar communication. If the little green men simply flashed a laser toward the Earth like a strobe light, we would see periodic bursts of light hidden in the spectrum of their host star. They would be incredibly faint and rapid, but a mathematical analysis could uncover them….The overwhelming majority of those stars are in the same spectral class as the sun, which Borra says supports his hypothesis that this signature must be the result of extraterrestrial intelligent life. And with the data in hand, he thinks that 234 distinct civilisations are beaming pulses of the same periodicity (roughly 1.65 picoseconds) toward the Earth.

I’m all for optimistic interpretations of the data, especially if they are interesting, entertaining interpretations. But the notion that 234 different alien civilizations all decided to do this … at such times that we’re seeing all their signals now … sure they did. What else does anybody have to do with their time but flash lasers toward the Earth. You know, this is the kind of notion you should let your friends talk you down from. Before you go public.

For me the Skepticism Arrow is waaay over to the right: 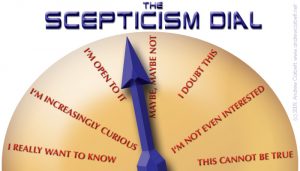