Okay, I just finished listening to Strands of Bronze and Gold — nice title, btw, evocative and poetic, though I will say neither bronze nor gold makes me think of red hair. Copper, maybe, but not bronze or gold. Still, I like the title anyway. This book got a nice cover, too. 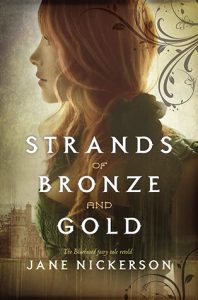 Now, as you may know, this is a Gothic retelling of the Bluebeard story. I actually looked up Bluebeard on Wikipedia when I was halfway through the book because I couldn’t remember if Sophie was supposed to survive or not and was getting a little tense about it. (She does, as you no doubt recollect from the actual Bluebeard story.)

Two things seemed potentially problematic about this novel going in:

1) I was listening to it, and as I’ve mentioned before, any problems with the writing are going to be substantially magnified by the audio format.

2) Gothic heroines can be so ridiculously stupid and/or ineffectual, thus rendering the book unreadable.

However, I didn’t find either of these things to be a problem.

First, the writing is very good – atmospheric and creepy, with good rhythm and a good pace through each sentence and paragraph. The narrator was good, too, vanishing into the story. It must have been fairly demanding, since a couple of the characters had French accents and one a British accent. The narrator handled all that well, making for a really enjoyable listening experience.

Second, somewhat to my astonishment, despite her situation Sophie did not strike me as stupid. Nickerson has her realize (over and over) that something might be wrong, that her Godfather may not be as wonderful as he seems at first, that his intentions might not be exactly proper, and so on. But every time she talks herself out of her doubts and fears it seemed believable. After all, she doesn’t know she’s in a Gothic novel, and the doubts that niggle around the edges of her acceptance of her new life at the Abbey seem so incredible . . . and not only that, but Bernard, Monsieur de Crussac is extremely good (practiced, you might say) at saying or doing just the right things to make Sophie believe she’s being too sensitive or too imaginative or too unsympathetic. Then by the time Sophie finds out what he’s like, she’s wound up in his web pretty tight. I actually found myself believing in and sympathizing with Sophie’s situation all the way through. You can see the sorts of psychological manipulation that can keep a woman under the thumb of an overly jealous, controlling man, even disregarding the extreme limitations imposed by the time period (mid-1800s), the place (the middle of Mississippi), and Sophie’s peculiarly isolated and powerless situation at the Abbey.

Given the way Nickerson handles the story, it’s actually believable that Sophie stays at the Abbey even after she falls out of . . . not love . . . infatuation with Bernard. Even after she realizes she can’t handle his moods and tempers as well as she at first hoped. Even after she’s afraid of him. Granted, in her place, I would eventually have begun thinking coldly and rationally about dropping poison in Bernard’s tea. But after all, unlike Sophie, I already knew about the murdered wives.

The Abbey is wonderfully Gothic. Brought over from the old world and rebuilt stone by stone in 1850s Mississippi, parts of it are magnificent and parts terribly creepy. The surrounding lands are also well drawn. The feeling of isolation is very well done.

Because of the Booksmugglers’ review, which I read years ago and dimly remembered, I was keeping a very close eye on the slaves and their relationship to Sophie and their roles in the story. Honestly, I thought Nickerson basically handled the problems of race and slavery rather well. Given their situation, the house servants shouldn’t trust Sophie – and they don’t. Never. Sophie is actually not important to them at all. She isn’t the one arranging Underground Railroad things; she isn’t the one directing Talitha’s escape with Charles; she has no power – only Bernard has power. She is completely tangential to their lives, to which she is not privy. The relationships between Sophie and the servants are minimal all the way through, echoing and adding to Sophie’s almost complete isolation. I don’t see the “white savior” thing at all. In fact, Sophie is as powerless herself as the slaves, which makes me wonder if that’s one important reason for choosing this setting in the first place – to draw that exact parallel. Various reviewers comment about Sophie’s strength and her skill in manipulating Bernard, but actually for at least the latter third of the story, she is almost completely unable to anticipate Bernard’s moods or soothe his temper.

The one aspect I found problematic was the wise freedwoman who lives in a cabin in the woods. I thought she was a bit much, not to mention unnecessary for the plot, but not direly offensive. YMMV, obviously, but this woman plainly has her own motivations, which are not ones Sophie anticipates or even agrees with. Of course she is not a deeply developed character, but then this story focuses entirely on Sophie and Bernard; no other character has much depth, not even the eventual love interest.

Entertainingly, two of the people I follow on Goodreads have opposite views on the pacing through this story. Khahn declares emphatically that the story dragged terribly toward the second half and she had to force herself to keep going. Heidi says, in her review which I think first brought this book to my attention: “Laying the setting for this retelling is slow in the extreme … the first half of this book was a struggle to get through.”

As a writer, this total disagreement pleases me. It’s this kind of thing that frees you to write for yourself since plainly there’s no way you can make everyone happy.

Well, I thought the pacing was fine all the way through. A bit slow, yes, but audiobooks often seem slow to me. I was never tempted to skip ahead. In contrast, the last audiobook I listened to, I got bored and skipped way forward and basically just listened to the first third and the last couple chapters with nothing in between. I think the quality of the sentence- and paragraph-level writing is what made the difference.

The story’s basic outline is set by the original Bluebeard tale, obviously. This retelling stuck rather closely to the original, though it departed in keeping Sophie so isolated from her siblings for most of the book. At the end, she isn’t rescued by her brothers – I thought the man she falls in love with might rescue her, but he remains a very minor character all the way through. In the end, Sophie almost rescues herself, though not quite. I might have preferred it if she had, but it was all right the way it worked out.

A scattering of loose threads: the tapestry is surprisingly unimportant for something that seems set to play a bigger role. Some characters are introduced but then go nowhere, especially the Chinese butler. Though she did not generally strike me as stupid, I did think Sophie was a bit dense about Odette. So there are a few details that made me wonder what Nickerson was thinking. Basically, though a solid retelling if you’re in the mood for a Gothic story.

3 thoughts on “Recent Listening: Strands of Bronze and Gold by Jane Nickerson”