Okay, we all know that new releases get the buzz. How else could it be? Also, they need the buzz. I certainly hope my upcoming release gets its share – incidentally, Mountain has been picked up by the SFBC for its big November holiday mailing, so yay!

On the other hand, I’m sure we all agree that it’s a shame when really outstanding books fade out of sight. So, with that in mind, I wanted to highlight a book that I first read a long time ago … a book I have re-read at least half a dozen times … a book that has by chance pinged my radar a couple of times recently, so it’s been on my mind.

I am referring, as you may have guessed, to Lord of the Two Lands by Judith Tarr. This book first came out in 1993. Twenty-three years ago. Wow. How time flies. 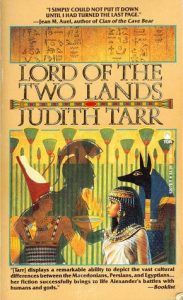 Now, what does Lord of the Two Lands offer the reader? Let’s see:

In 336 BC, Egypt lay under the yoke of Persia … but from the north, a spirit of fire was moving across the world. A great general, the king of Macedonia, had risen to challenge the might of Persia. He was called Alexander, and the priests of Amon in Egypt saw that he was born to rule their ancient land. So they sent Meriamon, daughter of Pharaoh, Singer and Priestess … to find Alexander and persuade him to turn from the straight Eastward road and come south, to where the double crown of Egypt awaits him.

Yes, yes, all that is accurate enough. “Firmly based in the history of Alexander the Great,” it says, which seems true to me, though I’m no historian to judge the details. The story certainly feels true, the way great historical fiction should. This is also the kind of book which has an author’s note in the back to explain the real history. I always appreciate that in any historical novel.

Also, the cover copy says, “Steeped in the rich, sun-drenched magic of ancient Egypt.” Very promising. I mean, I like straight historicals just fine, but I have always liked historical fantasy even better.

But none of that tells you the important thing, which is that Meriamon is a wonderful protagonist, that she is surrounded by wonderful supporting characters, that not all the magic is exactly sun-drenched – Meriamon’s shadow is also wonderful, if scary – and that all the way through the story, you soak up both the historical period and the magic until you have to believe it’s all true, that Alexander’s taking Egypt from the Persians happened just like that.

Though younger, Meriamon is something like Maskelle in Martha Wells’ The Wheel of Time — a woman who, right from the beginning, is confident of her skills, her strength, and her choices. You don’t see this all that often, partly because so many stories, even when nominally adult, draw on YA-style characters and character arcs. You don’t generally get to start off with an already-competent protagonist. Actually, this is something I struggled with a bit in Mountain because even though she’s just twenty, Oressa is already a pretty confident, competent person. Her character arc had to do something that didn’t involve moving from tentative to confident. (Oressa moves more from secretive to open, in case you wonder).

So because of her inner confidence and hidden skills, Meriamon never, or hardly ever, has to worry about her personal safety. She can thus focus on her goals. She’s a very goal-centered woman, and she can be quite ruthless in working to get what she wants – Alexander to drive the Persians out of Egypt and take its throne himself. Actually, this reminds me of Tremaine in Martha Wells’ Ile-Rien trilogy. I’m guessing that if you like Martha Wells, you are likely to love Lord of the Two Lands; I’m only now seeing how both Tarr and Wells have created some of my favorite protagonists, and in similar ways.

The supporting characters surrounding Meriamon are also excellent. We get Alexander himself, of course – arrogant and determined and ruthless and clever. And Ptolemy, who of course went on to found the line of Greek pharaohs after Alexander’s death; and Thaïs, a Greek courtesan, also a real historical figure; and a whole bunch of others. Not least Sehkmet the cat. Also not least, Meriamon’s jackal-headed shadow.

I suppose this book – and Tarr’s other historicals, though this is my favorite – probably played a role in developing my taste for historicals set somewhere around the Classical period. Also my taste for stories where you practically drown in the sensuous, detailed setting. If you share those tastes, or are looking for a confident female protagonist, this is definitely one you should pick up.

Now. What is one book, over twenty years old, that you think particularly ought to be returned to the forefront of readers’ attention?