So, a term I’ve seen around recently, which is supposed to be the antonym for “Grimdark,” is “Noblebright.” What do you all think about that? I like it, more or less, though it sounds like the sort of term that would be applied mainly to a subset of high fantasy rather than across SFF subgenres.

How would you define it? Apparently it’s been around in roleplaying game circles for a while: An Urban Dictionary entry from 2010 reads: used to describe roleplaying settings, noblebright is the opposite of grimdark, used to describe settings where noble heroes valiantly fight against evil forces to create a brighter future. That sounds like a fine definition to me. I think you do need both elements: the protagonist needn’t be one-dimensional and certainly shouldn’t be artificially saccharine, but he or she ought to be fundamentally “noble.” Which definitely includes “striving for a better future.” I think that’s a very important element.

Also important: the quest toward a brighter future has to be successful. The world must be objectively better off at the end of the story than it was at the beginning. I think that’s also crucial for anything that’s supposed to be an antonym for grimdark.

The protagonist should be a better person at the end, too: stronger or more morally confident or something of the kind — the opposite of (say) Abercrombe’s FIRST LAW trilogy, where the guy who becomes in the end a puppet king was striving to become a better person but instead becomes weaker; or even more so in the related BEST SERVED COLD, which is the one that solidified my own vehement dislike of grimdark. Heroism goes nowhere in grimdark; that’s part of the definition. THE GASLIGHT DOGS had the same kind of character arc for one of its protagonists; he started off weak and ended up evil. UGH.

So, what would be some examples of noblebright fiction, if you defined the category by example? I’m looking specifically for fiction, not games or movies.

I mean, lots of stuff is “not grimdark” but also does not strike me as fitting into any possible “noblebright” category. 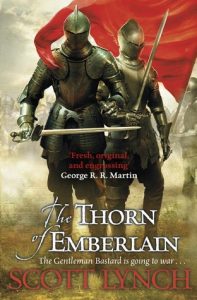 Why it’s not grimdark: It’s just not. It doesn’t have that world-going-unavoidably-to-ruin hopelessness.
Why it’s not noblebright: the main characters are in it for themselves — they’re not striving for anything but their own wealth. Also, too gritty. So, since I feel that last is a count against it in this context, obviously I would add “not too gritty” to the definition of noblebright fiction.

How about Django Wexler’s THOUSAND NAMES? 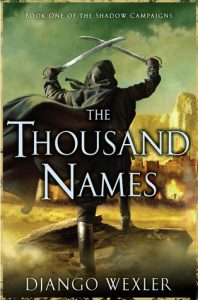 Why it’s not grimdark: It’s just not. Also, I presume the bad guys will not ultimately win (the series isn’t finished, but it doesn’t seem aimed in that direction).
Why it’s not noblebright: Winter is focused on herself and her own life. Marcus is focused on himself and his immediate surroundings. Who the heck knows what Janus bet Vhalnich has in mind? It’s impossible to be completely sure he’s even a good guy. I love these protagonists, but they don’t strike me at all as noblebright protagonists.

I like Lynch’s series; I need to read the 4th book. And I LOVE the first two books of Wexler’s series and look forward very much to starting over at the beginning and reading the whole series straight through when it’s finished. But they’re not noblebright, imo.

The Sharing Knife series. Fawn is focused mainly on herself and her small-scale concerns, but Dag is definitely focused on the broader picture.

The Chalion series. Even more so. The way the religion is handled on top of the protagonists and the basic structure of the plots makes this series definitely fall into the noblebright category.

The Goblin Emperor. Although I wish it had a sequel. But even from the first book, you can see how much better the world will be after Maia’s reign.

I started off by thinking of adult fiction, but I wonder if more YA falls into the noblebright category. Robin McKinley’s books, say. You know, The Wings of Fire series totally fits the criteria.

What do you think of the proposed category and its name? What are a couple examples you can think of — and are they MG, YA, or adult?

13 thoughts on “How do you like the term “noblebright”?”