From Camestros Felapton, a chance to nominate and for all I know possibly vote on the best cover for any book that was nominated for the Hugo or Nebula or won the new Dragon award this year. Ooh, covers! Always happy to have strong opinions about the artistic merit and general coolness of book covers.

Unfortunately the linked post didn’t actually provide the covers — but here is a post where links are provided to the covers.

Now, imo, although a spaceship cover is fine in that it signals This Is SF, it is also just a terribly boring, genetic type of cover. So for me that takes out The Long Way and Ancillary Mercy and Children of Time. A basically monochromatic cover is generally not that appealing to me, especially if the cover is very dark (I’m sure there are exceptions), so that takes out Europe at Midnight and Somewhither. Any kind of cartoony style or any kind of stylized lettering with no scene or figures is generally not something I’d go for,so that takes out Way Down Dark.

Wow, I’m being hard to please.

Honestly, out of the whole bunch, there are plenty that I don’t think would catch my eye if they were face out on a shelf in a bookstore. Too black, too stylized, too generic, too whatever.

I guess my picks — based on nothing but personal taste– are Updraft and Uprooted. 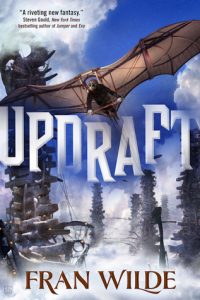 What I like: it is blue. A nice cheerful blue that catches the eye. It also tells a story, or invites the reader to wonder about the story. A kid in a hang-glider is just interesting and appealing. It suggests a world. If I saw this in a store, I would pick it up and read the back. 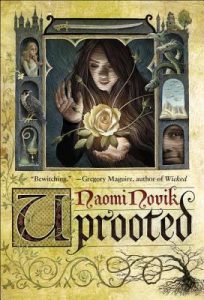 What I like: it is colorful, though yellow is not as pleasant as blue. This is a nice soft yellow, though. I like the girl and I particularly like the rose. The artistic way the tree branches turn into scrollwork is attractive and interesting and makes a nice border for that part of the image. Again, I’d read the back, even if I hadn’t ever heard of Novik.

Anyway, click through if you want and you can see what you think of all the rest of the covers.

2 thoughts on “Best Cover for this year award winners”