Brandy at Random Musings has a post up about books she’s had on her TBR pile since before she starting blogging. What an fun (if mildly depressing) idea for a blog post! It’s from The Broke and the Bookish; here is the overall list of blog posts on this topic.

Brandy’s list is interesting. You know what’s on there? The Curse of Chalion. Wow. If I could choose one book I could MAKE people read, that would be a possibility. Also Inda by Sherwood Smith. Well, I know a long five-book epic fantasy series is kind of a commitment. Still.

Mind you, my life would be fine if I’d never read American Gods.

Also, I note that I also have Mistborn on my TBR shelves. I don’t think it’s been there more than a year or two, but it is there.

Anyway, it is an interesting topic and although I don’t remember when I started blogging, I can easily pick ten of the books that have lingered the longest on my TBR shelves. Which is entirely the physical shelves; after all, those were there a long time before I got a Kindle. So I went downstairs and gazed at the shelves and here are some contenders for Longest Inhabitants of the TBR Shelves, in no order because those shelves are not alphabetized:

The Name of the Wind by Rothfuss. I know, right? I was delaying until the whole trilogy was out. Now I’m delaying for no good reason. Well, busyness and the fact that I want to read other things more, I guess.

Red Thunder by Varley. I have loved other work by Varley, but near-future sociopolitical stories are really not my thing. Someday I will at least read the first chapter and who knows, maybe this will be really great and I will be sorry I put it off so long.

A Thread of Grace by Russell. I have admired other books of hers, but they can be so unbelievably brutal. I’m scared to read this, frankly. Yet I still kind of want to. Hence its long tenure on the TBR shelves.

Havemercy by Jones and Bennett. Frankly, I would probably have read this already if the dragons were real dragons instead of mechanical dragons. 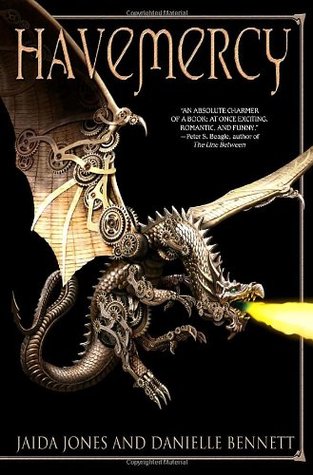 The Demon King by Chima. I KNOW. I keep meaning to read this!

The Children of the Sky by Vinge. I really liked the first book! Parts of the first book, at least. I was much more engaged with the smaller-scale story with the tines than the bigger story happening offplanet. That may be why I have never quite opened this book.

The Physick Book of Deliverance Dane by Howe. This was recommended to me by someone or other and I do keep meaning to try it. Goodreads says: “A fresh present-day story infused with an original take on popular history. Forget broomsticks and pointy hats; here are witches that could well be walking among us today. This debut novel flows with poetic charm and eloquence that achieves high literary merit while concocting a gripping supernatural puzzler.” Poetic charm, I have to say, it does sound like the kind of thing I might like.

An Instance of the Fingerpost by Pears. It sounds very literary and erudite and frankly I have to be in just the right mood for that kind of thing.

This is Shyness by Hall. I have been on the very edge of reading this any number of times. Yet somehow I haven’t quite.

The Goddess Abides by Pearl Buck. I have liked all the books I’ve read by Pearl Buck. But again, I have to be in just the right mood and not distracted by some newly published title that I’m dying to read.

There, I think that’s ten. Incidentally, in case you’re curious, I have 92 books on my physical TBR shelves right now.

How about you? Anybody got a particular book they own and keep meaning to read but somehow just never seem to get to?

14 thoughts on “Books that linger on the TBR pile”